was looking at the comic column in Straits Times Life! and a cartoon character said she is trying to reduce credit card debt. it was funny, until i realise i am in the same shoes :( counting down the pennies to payday :P got carelessly over-leveraged. ok, fine, i promise myself to be a better women next year, especially with the recession looming.

Bye, friends, i am going off to Hainan Island early, really early tomorrow. if i am sufficiently bored there, will blog. i heard that there is a famous chicken dish, Wen Chang Chicken. who knows? maybe it is the original Hainanese chicken rice.
Posted by MoB No comments:

God answered some of my prayers pretty quickly in the past few days, so quickly, that i was surprised. maybe i wasn't really expecting an answer, and the prayers were almost perfunctory. sometimes i forget whom i am praying to.

but the biggest reason why i was surprised, as that too often, prayers don't get answered immmediately. some prayers appear to get shelved, and the results were seen only much later. some never get answered, at least, not in the way that i want it to be answered. looking at the spotty record God has in answering prayers, a cynic can easily ask, then 'how do you know that there is a God at all?" after all, the results look random, and it is the pattern-seeking human who puts God into the picture when possible.

it is a good thing then, that i don't base my faith on how my prayers are answered. granted wishes are proof of a genie in a bottle, not of a sovereign God. As human beings, we look to the supernatural for proof of God, as if God would use magic all the time. even the people in Jesus' time asked him for a sign of his deity. If there were a God, He would part the Red Sea more often than once, He would lift up his beloved disciples so that their feet would not strike a stone, He would smite the blasphemous or nasty in a satisfying manner. at least, that's what we would do if we were God. we would behave like Bruce Almighty :P

but in our New Testament times, God doesn't seem to work this way anymore. It is not that He stopped answering prayers, i come to see that He prefers to respect natural laws and gently direct the course of our lives and circumstances instead, to meet our needs, to comfort and to guide. maybe one day when we look back at the entire picture of our lives or the course of history, we would be astounded by the ingenuity God displays in orchestrating His plans without resorting to magical shortcuts. personally, i think that this would be much more difficult.

oh no, i have joined the menagerie and become an animal too.

today's babysitting army saw a tiny chick of a girl who was two sizes smaller than everyone else and timid as a mouse. whenever she was left alone, her little lips would quiver and those big round eyes dart around the room anxiously for mummy. what is the nanny to do? so, this is what i did the whole of the first hour: 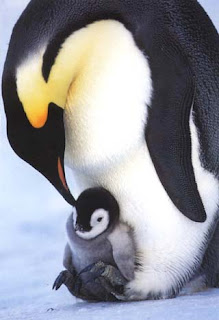 i felt like a great fat mother hen nestling the chick under my wings. she was so young that she didn't seem to understand what was going on, and stare uncomprehendingly at you if you try to talk to her. hehehe, it was almost like hugging a warm soft toy...until it wanted to go and pee :P then this mother hen relinquished her to the toilet 'choo-choo train', and ran off happily to play with other chicks, i mean, children. the menagerie was rather quiet today because some of the most lively members were not around, so it wasn't as tiring as usual. or maybe, i am getting used to babysitting already.

this epic campaign makes me want to laugh. some undergraduates from SMU want to stop people from reserving seats with packs of tissue, and staged the monumental effort of giving out packs and packs of tissue with the words 'this seat is not taken, it is yours'.

in the first place, i am not convinced that it is an anti-social act to reserve seats in this manner. after all, it is not like the seats are hogged for a long time. it is perfectly understandable that diners want to be assured that they have a seat after they bought their food, right?

what is so intimidating about a pack of tissue? why does it stop people from taking the seats? it is effective as a means of reservation only because we all respect the unspoken social rule, because we too have benefitted from it. surely you don't mean to say that all this while you have been fuming, you continue to be rendered helpless by a pack of tissue? my goodness...i would love to have such compliant children in my menagerie.

i thought, the easiest way to abolish the rule is to ignore it. those who refuse to recognise the sovereignty of the pack of tissue can simply take the seats anyway, and yes, use the tissue too, so there! :P

please, young people, this is really much ado about nothing. in other countries, undergraduates are running around naked to stop animal abuse, or demonstrating against excessive carbon emission. i would be embarassed to be fighting a battle over something as filmsy as tissue paper :P
Posted by MoB No comments: