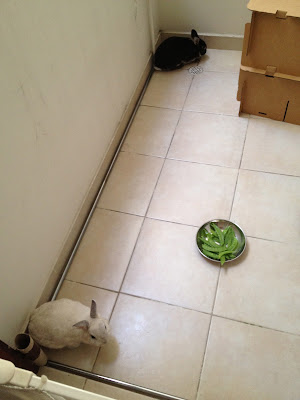 The dishful of delectable snowpeas is in the middle of the yard, so why are the two rabbits each hiding in a corner so far away from it? The reason is, they have each grabbed a peapod, and dashed off to eat in peace, far from each other. 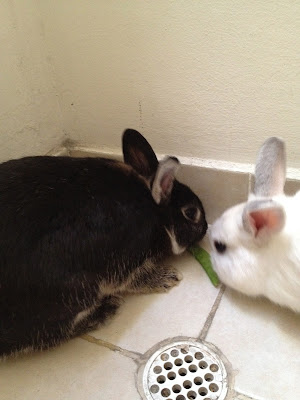 Unfortunately for Blackie, Whitty is a much faster eater, and refused to follow the rules of the game. Here she is, coming to partake of Blackie's share, having finished her own. 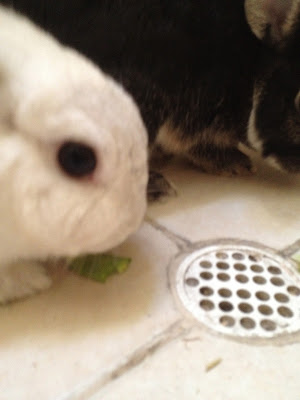 After a brief tussle, Whitty won, and poor Blackie is left sniffing around, wondering where his snowpea pod is. You are such a greedy girl, Whitty! Leave Blackie alone!
Posted by MoB 4 comments:

My youngest uncle got married and since they live in Malaysia, we thought it was a good idea to drive in for the weekend. Kluang is a prosperous, quiet town in Johor, away from the usual tourist areas so one really gets to see the locals' way of life. Isn't this a lovely river? There are street markets beside it, but we didn't venture into that part because of the lack of time. 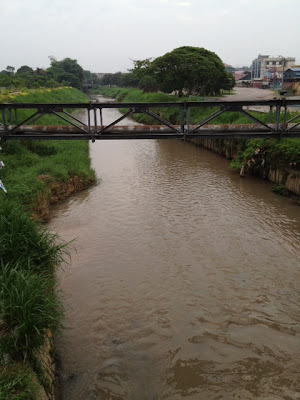 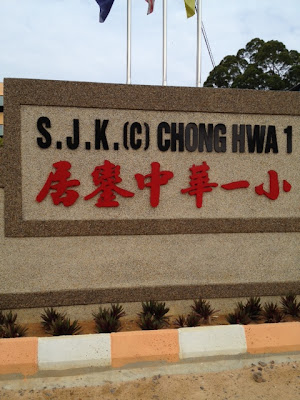 The fattest squirrel I have ever seen. No, I lied. I didn't see personally. Some of the folks in our family wanted to walk up the hill early in the morning, but I slept in :P HR took this picture instead. This is such a cute sight! 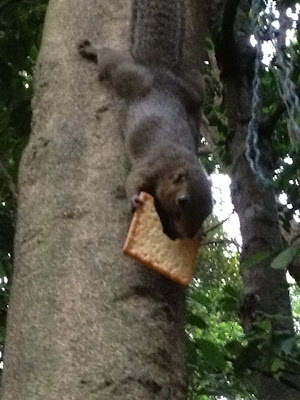 It was a lull period in the salon, and a group of manicurists sat around chatting. One was having a long-distance phone conversation with her daughter, explaining to her why she should not have stolen money. As she put down the phone in exasperation, she explained that it was difficult to discipline her younger daughter as she left her country to work in Singapore since the girl was very young, while the rest of the family remained in their home country. Another manicurist shared that she had the same experience, as she left her baby behind when he was only 40 days old. The conversation then wandered into a comparison of the cheapest way to call home, and I was left alone with my own thoughts.

Sometimes people carry out their daily activities while harboring quiet tragedy, and it takes unguarded moments like this to allow others a glimpse into their private struggles. In these migrant mothers’ efforts to provide more for their dearest, they ironically have to suffer estrangement from them, as well as the dreariness of working long hours in a strange land.

The media, both mainstream and on the Internet, often present these foreign workers in terms of statistics – the percentage they make up in our workforce, and the pay they receive relative to locals. Then there are the occasional hostile murmurings, rumblings of unfair competition. Fortunately, open xenophobia is not socially approved in Singapore. It must never be. Whatever political leanings one has, do not forget that each of these workers made immense sacrifice to come here, and who does not want to have a better life if they could help it?
Posted by MoB 1 comment: 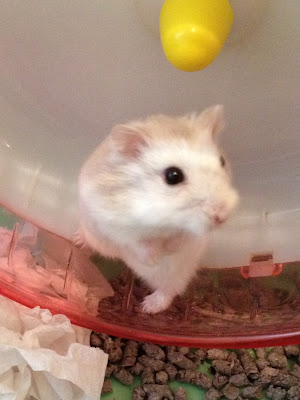 There is no doubt Potato is the most agile hamster we ever had. Tickle him in the middle of his wheel-running, and you will see him stand up effortlessly to check you out. The wheel is still swinging. Mind you, even we two-legged creatures would have difficulty balancing like this.
Posted by MoB 2 comments:

I wrote yet another email to SPCA, this time, complete with pictures and full address.

It makes me feel uncomfortably vigilante, but if not, what is going to happen to the poor rabbit?

The rabbits were kept along the corridor of the block of flats, exposed to rain and sunlight. The cage was fairly clean, too clean, in fact, because there was not a SINGLE SHRED of hay inside! There wasn't any food either, so obviously, this owner doesn't know the feeding habits of rabbits. At first, there were two of them, and they appeared perky, so I did not interfere. Months later, when I went pass the cage again, one of the rabbits was gone, and the other looked distressed and subdued. There still wasn't any signs of hay, pellets or other food :(

So I made an SPCA report. Sure enough, they wrote back to inform me that the rabbit had an ear infection :(

Frankly, I hate doing reporting of this sort. It makes me feel like a tattle-tale or a spy, but   I cannot bear to think of all the mistreatment that goes on. Why don't people learn how to keep their pets properly before getting one? Why have pets if you find them too much work? Does it make you happy to have an animal suffering at home?

Because animals cannot seek help for themselves, I am just going to have to do it. Yes, be a busybody and make sure that all such cases are brought to light. So there! 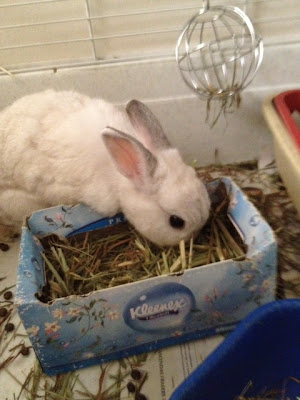 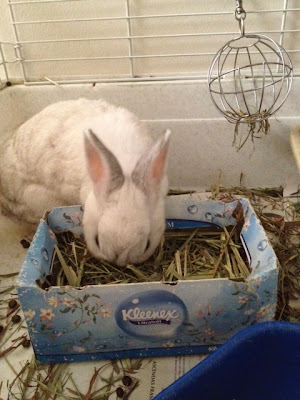 Whitty is really a very greedy little girl. When she is eating hay, she always places her paws on the box so that other rabbits (poor Blackie) know who the box belongs to. 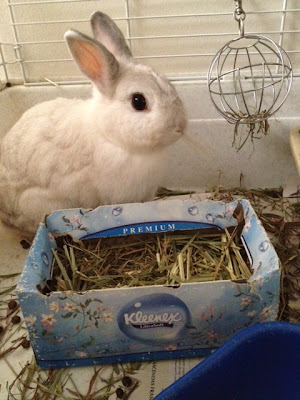 Hm...sometimes the name BusyBunny seems like a misnomer for these products, because all the rabbits want to do is lounge inside, for hours and hours. There is nothing they like more than being able to snuggle in the shelter, and they don't seem to get bored. 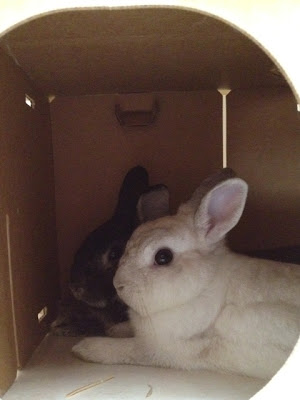 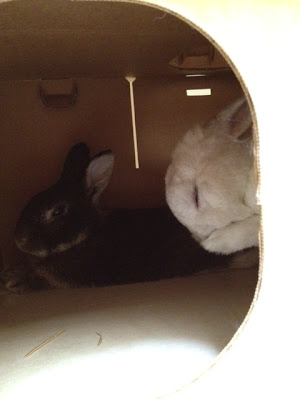 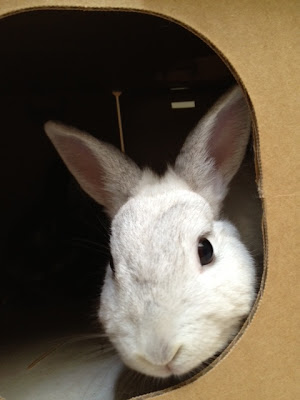 Curious about my camera, Whitty comes out to investigate. Ok, I get the hint, leaving you alone now. 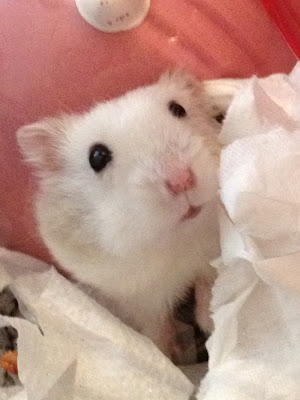 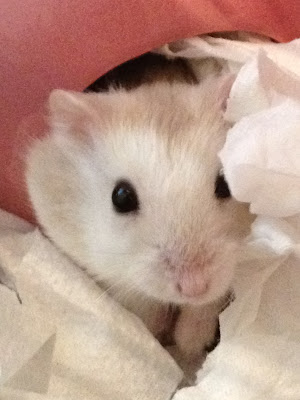 Isn't he cute? This is another of his innocent, "what's up" look.
Posted by MoB 1 comment:

Rabbits definitely love snuggling. Every bunny should have a snuggle friend. 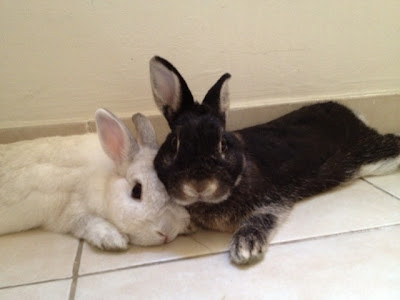 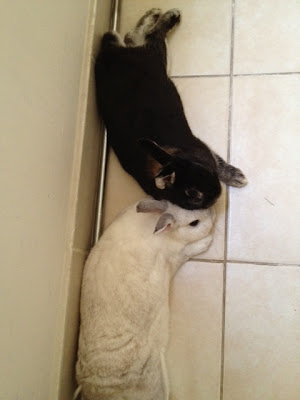 The tricky part for the producer is, how to make things more difficult for Ironman, since Tony Stark is a genius, and his machines are practically omnipotent. If saving the world is effortless, what thrill is there for the audience? The whole showdown could be over in a jiffy. Any action movie worth its ticket price is obliged to elicit collective gasps of horror and accelerate our heartbeats.

The solution turns out to be quite straightforward though - pry the man out of the suit and make him fight like, well, a man instead of a war machine. As Stark says, he is Ironman, whether he is wearing the suit or not. The man has to put in copious amounts of sweat and blood instead of hiding behind metal, or as he admits, his "cocoon".

There were a curiously number of opportunities for the ordinary folks to participate in the great mission, so that it is not the singular achievement of an elite superhero. For once, the mere mortals aren't just screaming victims or gawking passers-by. Every man-in-the-street has something to contribute towards defeating the villians and no effort is too insignificant to matter.  Is this an indication of the current political mood worldwide, some sort of Occupy War Street concession? I guess, even a superhero shouldn't have a monopoly in preventing Armageddon.
Posted by MoB No comments:

Potato, one month after being rescued from his petshop trauma...

King of his wheel! Isn't life good now? He gets his own wheel, sandpit, ceramic cave, tunnels and house. 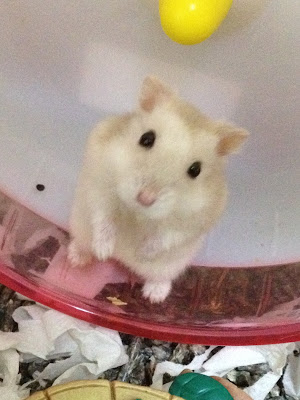 I must say that he is turning out to be a very well-behaved hamster, so much so that his nickname now is "Polite Potato".

How does a hamster show manners? When I offer him my hand, he sniffs at it without nipping, and licks me occasionally. Even if I pick him up, he doesn't struggle. If one of us goes near his cage, he would poke his head out of wherever he is hiding, and looks at us inquiringly. And best of all, he has toilet trained himself so cleaning his cage is much easier. This is definitely the most polite hamster we ever had.
Posted by MoB 4 comments:

I stopped visiting Sharejunction.com's forum for stock investors, and it isn't because I am no longer interested investing.

Over the years, there is a general decline in the quality of the comments made in the forum. It doesn't matter that many of these are simply efforts to cheer a stock rally. If that makes an investor in the red feel better, I cannot fault them. However, many of the comments are tasteless, or even lewd. Then there are the inevitable doomsday soothsayers, who are probably don't even own stocks, since they delight in prophesying stock market crashes. And last of all, petty keyboard wars frequently erupt, with childish barbs that fill up the spaces meant for stock analysis.

I can't help attributing this degeneration to the fact that the platform is free, since the free forums have gone down the same route. Anyone can go in to post whatever they like, and if they get banned, they simply create a new avatar. In comparison, the quality of the discussion at another paid forum is far more thoughtful. People post only when they have meaningful comments to make, and don't give silly answers to my questions.

When free platforms are abused in this manner, it only drives the serious investors into gated communities, where people do not misbehave under the cloak of anonymity. Then these free forums would be abandoned by investors who may have genuinely useful advice to give, and whose loss is it?
Posted by MoB No comments: