Read an interesting article about younger men marrying foreign brides. One was quoted saying that he wanted to get married so that his children can support him in his old age. Why does it sound so...wrong?

I guess, it just seems such a feudalistic way to see one's own wife and children. He paid a price for his foreign bride, and he bore his children. Then he assigns them important tasks in completing his life plan. It is almost as if, they belong to him. But you see, they don't.

I vaguely remember that at the altar, we vowed to love each other in woe and in weal, in sickness and in good health. A marriage is meant to be held together by unconditional love. Who knows if one of the couple would one day become the weaker link? What if, despite forking out good money for a healthy looking bride, she turns out to be barren, and thus fails in her destiny to provide children for him? Is this an occasion for a refund?

Besides, one never owns the children he has, even if he bore and clothed them. They belong to themselves, and have every right to live as they wish. They don't exist to support their parents. They usually do, because people usually love their parents. It is one thing to enjoy the fruits of love's labour, another to plan with cool calculation one's security in old age. The more we expect from others, the higher the chances of disappointment.

And if this is the deal offered by the would-be husband, I am not surprised that my lady compatriots are not interested.
Posted by MoB No comments:

I've expanded my repertoire of dishes, though I no longer like cooking. It is not fun anymore, and I'm so tired of healthy dishes - porkball porridge, steamed fish, lightly stir-fried tenderloin. Sometimes I am tempted to put in a few drops of sesame oil and rice wine...but no, these things are forbidden for now. Too 'heaty'.

Apparently, the convalescent has to feed on this special fish 'gnor he', to make sure that the wounds heal better. Unfortunately, since I know only the dialect name for this fish, I have no idea how to buy it at NTUC. I see 'snapper', 'cod', 'salmon', 'batang'...which is 'gnor he'? Being a anti-social and misanthropic, I don't speak to strangers and hence cannot ask the 'aunties' shopping in NTUC. And being a modern woman, I don't dare to go into the wet market...not that there is one where I live. Sigh...

Luckily, NTUC must have realised the predicament we young wives are in. It helpfully labelled the fish '五鱼' at the fish counter, and I understand enough dialect to know that 'gnor' means '五' in Mandarin. Ladies who are like me, for your information, the mystery fish is 'threadfin'. Now you know.

But I haven't found the sugarcane yet. Never mind, at least I have also learnt to double boil.
Posted by MoB No comments:

Were the tins half full or half empty? Mine was mostly empty.

It has been years since I last sold flags.

Maybe I have become older and less charming, or maybe I wasn't wearing a school uniform, and hence somehow invoke less sympathy. Whatever the reason is, people HAVE definitely become less generous and more hostile. I remembered gathering much more donations from the passers-by then. In fact, it was those who refused to donate who looked embarassed, as if they felt obliged to donate. What has happened to our society since?

I didn't mind the heat and discomfort of standing beside a bus stop with a tin, even if it meant getting covered with dust from vehicles' exhaust fumes. But what hurt most was the rudeness I experienced. My goodness, being a misanthrope, I wouldn't say that I am usually friendly. But it was shocking to see the kaleidoscope of rejection methods. Some people...simply put, behaved as if they had the right to treat others anyway they want. I wanted to say, hey, I'm a volunteer, not a beggar ok... Just trying to help out here. Trying to be useful to society, even if it annoys you. You have the right to be a stingy bug*er but not the right to be a rude one.
Ok, I admit, eventually, some aggressiveness in me manifested. I approached a group of NUS students and (politely) asked if anyone would like to donate. The semi-circle of undergraduate eyeballs stared at me uncomprehendingly, and so I said coldly, "Not one among (all of) you can spare one coin?" Then I rolled my eyes at them and walked away. Self-righteousness rarely felt so justified. So there!
Posted by MoB No comments:

Smiling through the brain freeze. Actually we came out into the open just for this shot. Then it's right back into shelter and heating. 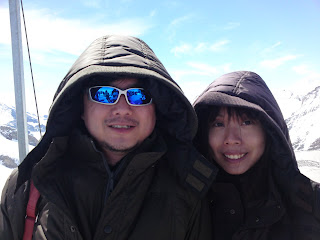 Forgot which lake this was. Too many lakes around 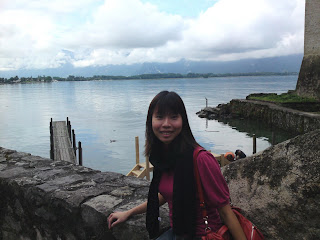 A pensive moment on the train. 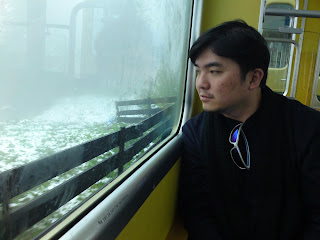 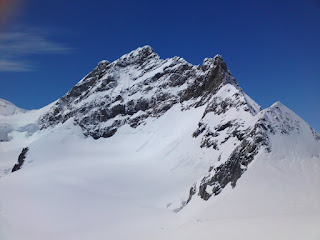