All the websites say a bored rabbit is a naughty rabbit. They just need things to occupy them. What fun they are having with this giant slipper! They can nibble it, hide in it and dig madly. 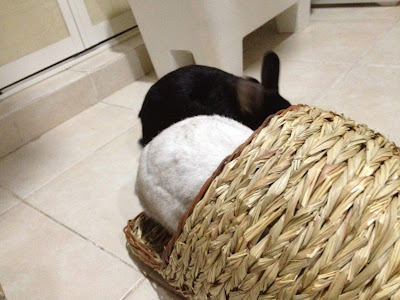 I hope this is enough to satisfy their curiosity and energy levels. 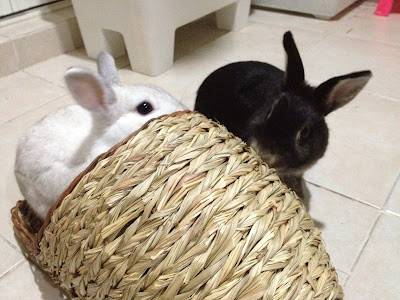 Oh no! Whitty STILL wants to go out! Here she is, waiting to slip out between my ankles when I open the pet gate. 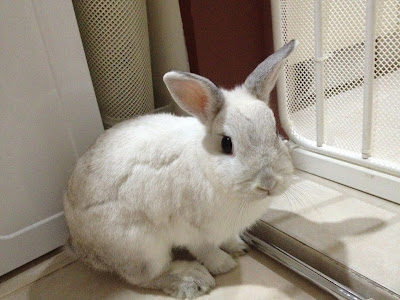 What more do you want?! I would love to give you more, but the yard is bursting with toys already!
Posted by MoB No comments: 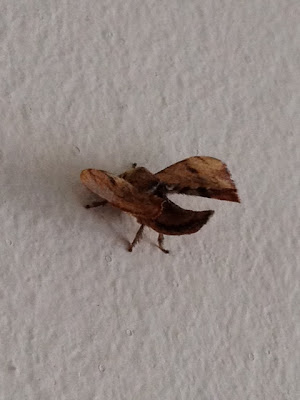 This strange flying animal has been flitting around my home for a few days. Is it a moth? Close up, you can see that it has a tail that curves up. I don't think it is a sting though. Hm...a refugee from the constructon site across the river, I guess.
Posted by MoB 1 comment:

Let the rest of the dolphins go...NOW.

We don't want to visit them. We don't think it is fun to see them swim in aimless circles when they could be in the ocean.

We don't want to see another dolphin die.


Do the right thing...now.
Posted by MoB No comments:

When they get the premium vegetable, they chomped everything down, stalks and all. But apparently, to these naughty things, only the leaves of the xiao bai cai is fit for consumption. Hey you two! Even we humans eat the stalks too! 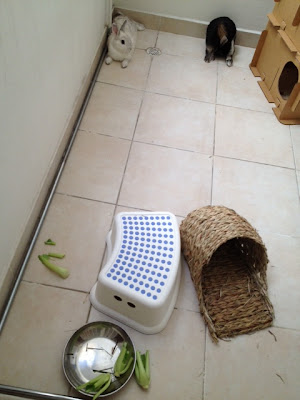 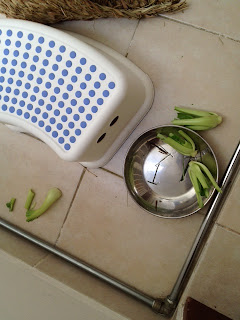 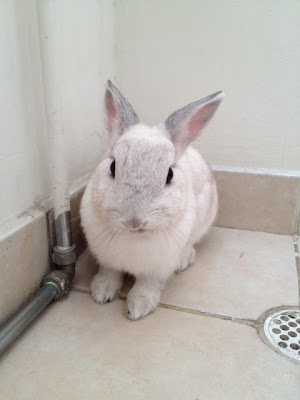 I put the vegetables there the whole day but nothing, nothing would make them eat the stalks :P Naughty rabbits!
Posted by MoB 1 comment:

Overhead at the management office. The cleaning supervisor explained to the estate manager that he had immense difficulty getting new gardeners. Then came some negotiation over whether the gardeners should help with area cleaning since that was short-handed too. Oh no, we are going to need to start picking up after ourselves soon.

Wait...isn't it something we should be doing anyway? Strange isn't it, that our beautiful city requires such a huge army just to keep the litter off the streets. I have always wondered who on earth are the people scattering litter everywhere, when there are so many rubbish bins everywhere!

What is the point of paying a million for an apartment, only to spoil the whole place with dirty habits?
Posted by MoB No comments:

How do they know? Just as they spurn cheap vegetables and love premium leaves, they can somehow tell that this Busybunny mini maze is of high quality. To us humans, a cardboard box is a cardboard box. I gave the rabbits many boxes, but they just like this one better! These two rabbits have such expensive taste! 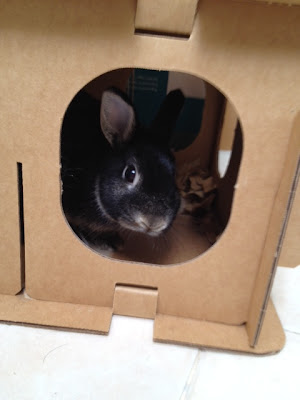 See? Blackie loves BusyBunny too :P He has spent long hours ripping, chewing, digging and generally being busy, and has left my doors alone. Hm...it looks like they need a new mini maze soon :P

The rabbits love BusyBunny toys. What a pity that it costs so terribly much to buy them in Singapore! 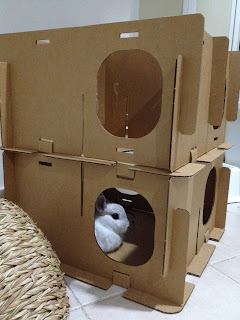 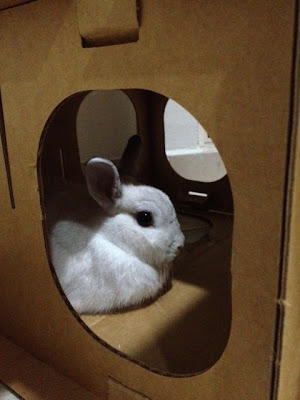 The great news is that they are reconsidering the animal protection laws in Singapore. It is heart wrenching and infuriating to see animals badly treated. I have a few suggestions:

2. Everyone buying or adopting a pet should be made to sign an undertaking that he/she understands what is needed to keep this pet healthy, and is willing to take up such a commitment. i.e. it ISN'T AN IMPULSE BUY!

3. Pet abandonment should be punishable by fine or jail. This isn't a frivolous suggestion. Pet abandonment is at once cruel and also a hazard to our local ecosystem. Imagine people releasing turtles into our river, for example. These would rapidly reproduce and be threat to native species of water animals!

We don't want to be draconian, but having these laws show people that animal welfare should be respected.
Posted by MoB 3 comments:

Chief bunny slave has been out of action, but the wheatgrass and treats have kept up. Hm...well done, reserve bunny slave.

I stocked up on wheatgrass before the op, but even those have run out by now. This morning I dug up some older organic carrots which they don't seem to mind. I am going to need to go to the supermart soon. 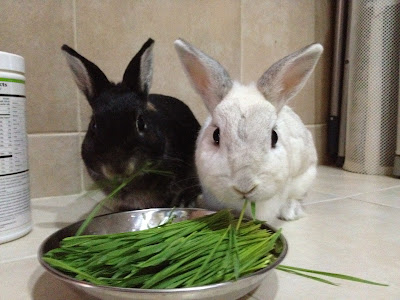 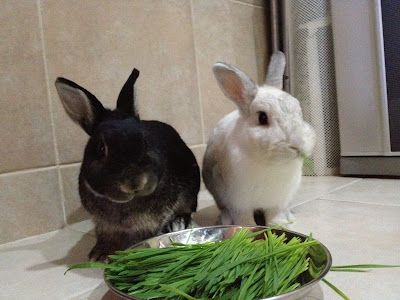 The rabbits had been having guests - Little Fish and the Fat One utterly love them. These furballs are so strategic - they really know how to beg in their cutest manner when our guests are around, kissing their ankles and sitting near them. It always baffles me when people say that rabbits are passive and boring. Blackie and Whitty are perfectly responsive and affectionate, full of personality.
Posted by MoB 1 comment:

Hadn't posted much in the past few days, was knocked out...literally.

It was considered a relatively minor surgical procedure, staying overnight at the hospital. The wounds are still sore and tender, but well, at least I'm sitting up and able to blog, surf the Net and generally keep myself fairly amused.

Hadn't much chance to see the rabbits. Didn't even feel like I could crawl over to the yard to look at them. V had been feeding them, but without my usual attention and love, they seem extra feisty and bad-tempered. *sigh* be good, little ones. I shall be able to play with you soon.

Thank God for the people who love me, who had been preparing nutritious meals for me and kept me company through those long, boring hours when I couldn't do anything much. And poor V has to manage all the chores and take care of me. I can't wait to get well.
Posted by MoB 1 comment:

Just in time, I remembered that two is a party, three is a crowd. So luckily for Blackie and Whitty, the adoption didn't happen after all.

The House Rabbit Society organised a rabbit adoption drive last week. It was quite a fantasy come true for me, to be in a room full of fluffy rabbits frisking everywhere - dashing across my path, nosing around my ankles, and nibbling shoes. Yes, even the last part was unbearably cute :P Anyway, those were V's shoes, not mine. As it was neutral grounds for all rabbits involved, there wasn't any fighting. And I could pat and play with all the rabbits there freely. One little grey Netherland dwarf didn't seem to have any friend, though he went from litter box to litter box. They all seem to ignore him. If I were to adopt any of them, it would be him.

But you see, three is a crowd. What would my two spoilt rabbits at home think? Maybe they would ostracize him, or eat up all his treats. What if he gets funny ideas about Whitty!

I was sad to see two handicapped rabbits at the adoption drive. One had only one hind leg, the other lost a front paw. By the time they were rescued, apparently they had already met with some mishap. It always makes me infuriated to see how some people treat animals, just because animals are weaker than them. These people don't ever deserve to have power over any animal again.

We left empty handed...well, not exactly. I parted with $5 for homemade cookies as part of the fund raising. Hope some rabbit gets to benefit from it!
Posted by MoB 2 comments: