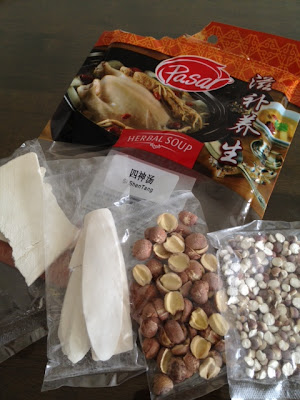 The weather has been frightfully hot, and herbal soups are such a good way to have a satisfying but light meal. NTUC has a nice range of affordable mixes, so you don't even need to be a herbalist to know how to brew one. I made 四神湯 that day. In the package you get fuling, Chinese yam, lotus seed and qian shi. For better taste, I added lean pork, some dried scallops and two slivers of smoked ham. It just has to simmer on low heat for one hour.

This soup nourishes the spleen to help with digestion, and drains dampness from the body. You can also add barley if you want it to be even more cooling.
Posted by MoB No comments:

I know...it is like rewarding the rabbit for his naughtiness. Remember that Blackie:

And the result is, we concluded he is bored. He gets to run in our yard and kitchen, and has a pretty bunbride, but these are not enough to keep this naughty rabbit occupied. So he gets new toys. This BusyBunny mini maze had better do the trick. 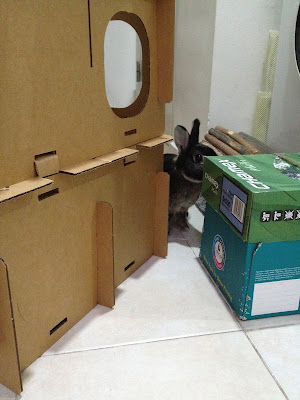 Ok Blackie, now you get a giant slipper of your own to chew. So please leave my shoes alone! 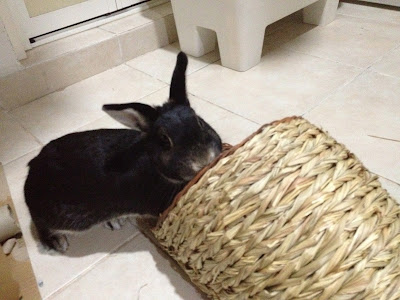 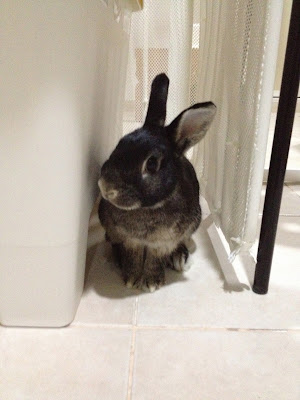 Thanks very much, bunny slave. I shall be very interested in them...for a few days.
Posted by MoB 1 comment:

Salad to feed the family 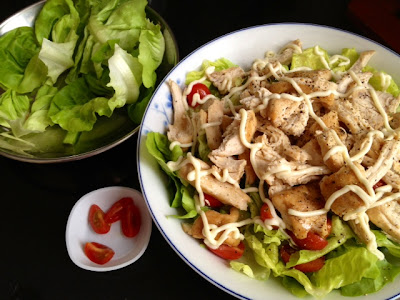 Salad for the whole family - humans and fur balls.

The humans' salad is powered up with grilled chicken, citron dressing and mayonnaise. The rabbits get a handful of butterhead leaves. The itsy-bitsy pieces of cherry tomato is for the hamster.
Posted by MoB 1 comment:

A diatribe against diatribe

Warning: do not read if you are easily offended.

Isn't it ironic? Our country has never been wealthier but people have never been angrier. Reading people's comments on the Singapore Conversation dismays me - with their cynicism, nitpicking, fault finding and general discontentment. Friends, look around you. Women are beautifuly dressed and toting branded bags, our roads are full of flashy cars. It is hard to get a table at popular restaurants at any time. Even the mrt stations are gleaming! Our shop shelves are laden with choices and even pets go to spa. There is much anxiety about making sure that one's children get into a prestigious school. But, even if one doesn't, any public school in Singapore can boast of good facilities and well-trained teachers. I dare say that every school in Singapore has its fair share of successful alumni.

I quite agree with Sumiko Tan that we are in our nation's golden age. Know that a country will not always be rich, so we are lucky to have experienced this era. There might come a time when we decline, then, is one going to be even angrier? Or perhaps paradoxically, the chastening of poverty would bring about a more appreciative attitude instead.

Blackie! You aren't supposed to be nibbling things when you are out in our living room! Look at the teeth marks he left on my lovely, brand new shoes! 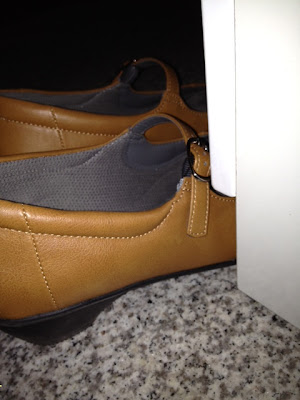 We grabbed the naughty rabbit and gave him a thorough rubbing, pressing his ears down. Just to show him who the boss is. 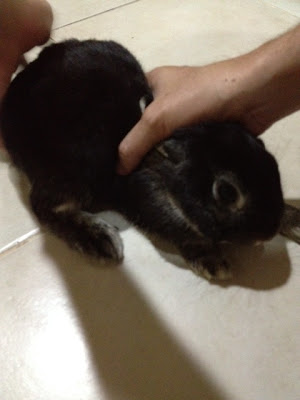 He got very upset though, and ran off to sulk in his cardboard box, turning his back to me. 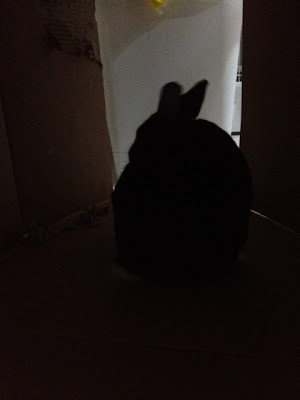 Bad boy! You aren't allowed to come out if you are going behave like this!
Posted by MoB 1 comment: 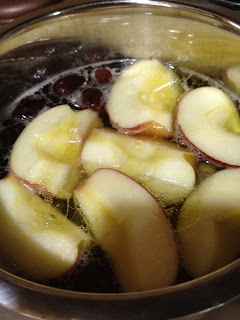 I know this combination sounds strange, but it works! The apples impart a beautiful fragrance and colour into the soup. I usually use kampung chicken for soups because it is less oily.

I am still feeling the pinch from my spoilt vacuum cleaner, mind you. But you see, they are so lovely and cute, it is hard to be mean to them. They are still getting their favourite hay, delicious fresh vegetables, and yes, still running around everywhere at home :P Though I have increased the rabbit proofing somewhat.

The weather has been terribly hot so now the two of them are too lazy to much roaming. They just flopped around on the cool ceramic floor. 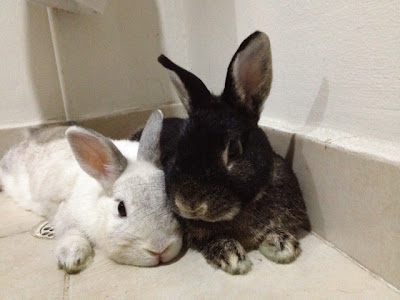 Aww...this is such a rare sight. Blackie is usually the one grooming Whitty, but today she decides to be nice. 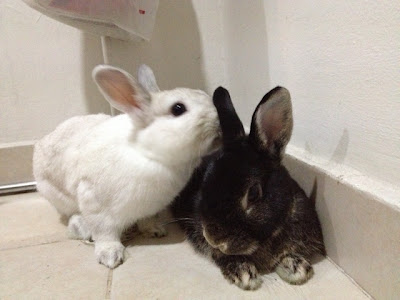 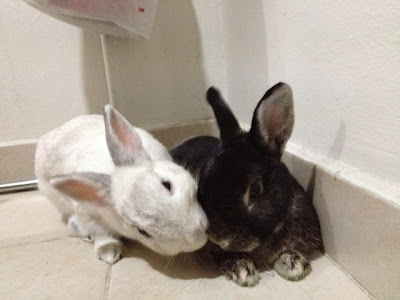 Bemused by the contributions to our national conversation. Apparently, many people want our society to be a happier one, to be more caring, less selfish, more generous, less demanding, to allocate more resources to the poor, old, weak and sick. BUT...

At the same time, there are so many reports of neighbourly discord, conflict over noise pollution, poor driving, animal abuse and other niggling social discomforts. Something just doesn't gel.

The paradox is, while we dream of a better society, we don't behave according to the ideals of this improved society. Since  our country is made up of people like you and me, if we remain the same, the society remains the same. Somebody has to start making these ideals come true. Somebody has to start by loving his/her neighbour.

But I am in no position to speak, as I have just called on my neighbour (politely, if perhaps coldly) to ask them to reduce their noise level, late last night. And whose fault is it? Should they have been more considerate? Could I have been more tolerant? I really can't tell.
Posted by MoB 1 comment:

Whitty: Down the rabbit hole

I don't know what the attraction is, but both the rabbits are obsessed with this corner with a tiny gap. Here, Whitty attempts a disappearing act. 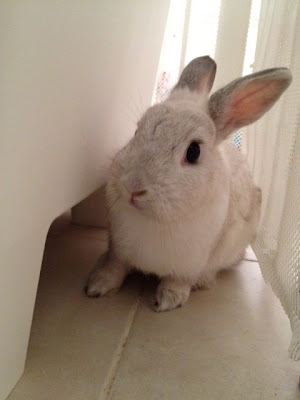 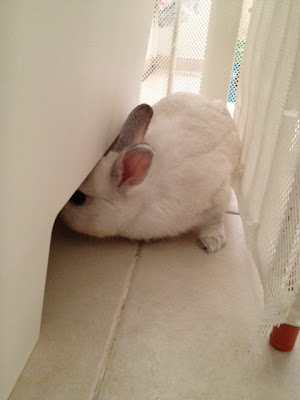 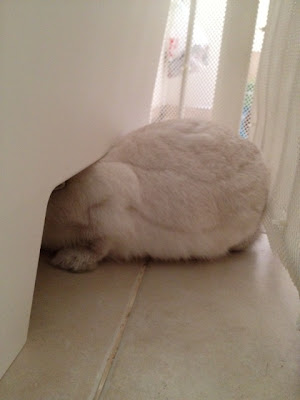 You silly girl, you can't fit in. What is there?
Posted by MoB 1 comment: 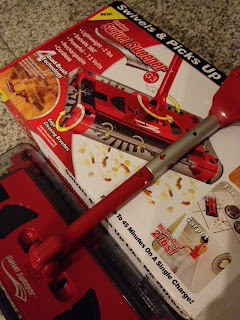 Trying to replace the vacuum cleaner which the rabbits destroyed, I went online to buy a cheaper version, and picked up this swivel sweeper for $40.

Firstly, it isn't a vacuum cleaner. It simply has silly tiny brushes which whirl around uselessly when you switch the motor on. If it even manages to pick anything up, it vomits it a little while later, when you are still cleaning elsewhere! I experimented by getting it to remove an itsy bitsy piece of tissue, and 3 swipes later, the paper is still there! WHAT THE ...! To think the TV commercial dares to show it picking up IRON NAILS! LIARS!

I want my money back! But this is an online purchase, and there is no one to harass :( I feel soooooo cheated!  This is just going straight down the rubbish chute >:I


Posted by MoB No comments:

It doesn't really matter if you don't give Blackie freedom to run in the whole house. He just wants to play in his favourite corner. Somehow, he is obsessed with squeezing into this tiny gap. 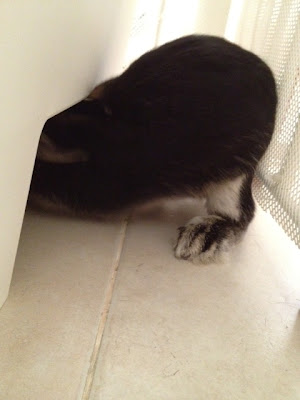 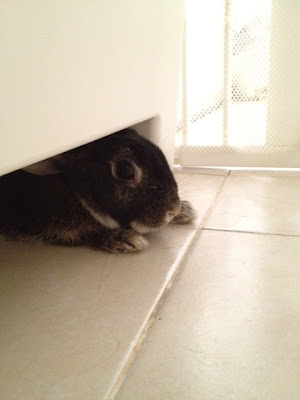 Apart from COE and property prices, what else has seen astronomical inflation in recent years?

Read on this blog Wedding Dinner that the latest red packet rates are now going at $120-$160! My dear friends, this is too, too dear for a meal. My goodness! It isn't too long ago that $100 was sufficient as a gift. And that is already a pretty penny. I mean, I am happy for my friends who are getting married...but I won't be very glad to part with such a big packet for a meal, really.

As I was a reasonably frugal bride (someone asked me if my dinner was at a community centre), I am really very baffled by people who seem willing to empty their coffers for one day. And worse, to invite their friends who then have to cough up to help subsidize their grand celebrations.

Yeah, this post sounds so mean huh. It is people's event of a lifetime, and here I am, being such a Scrooge about it. But you know, I'm sure I'm not the only one feeling sore about the price of goodwill. You have been warned.

Just look at them, sleeping without a care in the world, not knowing that I am scouting around for the cheapest way to replace the vacuum cleaner, which they spoilt. In the meanwhile, the floor is just getting dirtier than ever :(

It is amazing just how disapproving rabbits look even when they are sleeping huh. 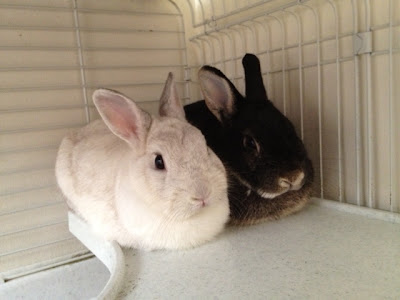 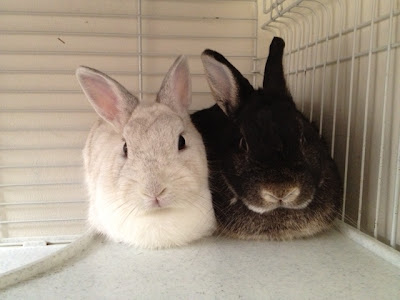 It is a hot and lazy afternoon so these furballs are really lethargic. They aren't waking up for anything less than dried apple.
Posted by MoB 2 comments:

BLAAAACKIIEEEE!! Arh!!! The cost of love! 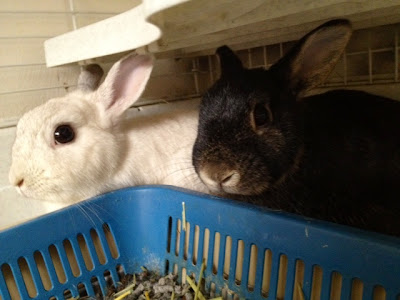 Blackie
1. Nibbled a hole in my wooden door frame
2. Left his teeth marks on my walls and now...

He spoilt my vacuum cleaner! This is going to cost more than a hundred bucks to replace, you RAAABBIIIT! YOU RABBIT! You are in disgrace! No treats for one month!
Posted by MoB 1 comment:

In favour of PSLE

There are increasing calls to remove the PSLE from our national school system, because it is causing too much stress to our children (and parents).

Many complain that our education scene is no longer a level playing field for all children because rich parents can afford more resources and tuition for their children. But would removing the PSLE change that? If anything, I have always thought that the exam hall is the place where, stripped of all external help, each child gets a fair shot at doing his very best.

If there isn't such objective yardstick anymore, we would have to rely on other measures that could require far more resources, such as cultivating niche skills, or elaborate project work (which parents won't be able to resist helping in).

Some mentioned the possibility of a through-train system from primary to secondary school so that children do not have to take an exam so early. Wouldn't that mean even greater stress at the annual P1 registration? Imagine if one registration determines the child's experience for the next ten years! At least our present system allows children again, a fair shot, at getting into their preferred secondary school, where admission cannot be influenced by their parents' volunteer work or other such advantages.

I come to realise that the stress does not come from external factors in the system but inherently from parents' keen desire for the best for their children. Come on, as long as resources are finite, one always wants a headstart over others and be in a position of strength. Isn't this the true source of anxiety?

While we shouldn't be afraid to reexamine sacred cows and slay them if necessary, we cannot become trigger happy! These are features in our educational system that served us so well for so long, for good reasons. Remember that once Humpty Dumpty has a great fall, all the King's horses and all the King's men cannot put him together again.
Posted by MoB No comments: