Away from the stress and discomfort of his former home, Potato has settled perfectly well into his new one, and thoroughly enjoying life in our home. We gave him a ceramic cave which keeps him cool in our hot weather here. He adores it and spends a lot of time making it dirty.

And he gets to share the best of the rabbits' vegetables (which is already the best that we could buy in the supermart!) Here he is, nibbling daintily at a strand of wheatgrass. Hm, he really knows what is good for him. 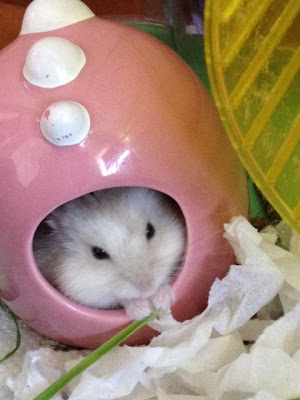 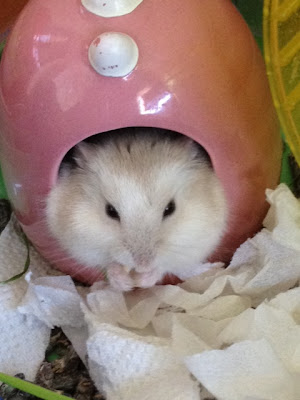 Yummy, he loves peanuts too, but we can't give him too much of it.
Posted by MoB 1 comment:

A matter of taste

It is funny, but Potato seems to find the oddest positions to sleep in! In this picture, he is in his sandpit, but rests his head on the ledge. Is it comfortable? 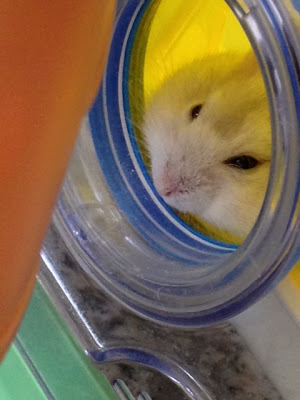 This is even odder! He squeezed himself behind his ceramic cave, and slept, head down! That's his tail sticking up! You funny little thing. 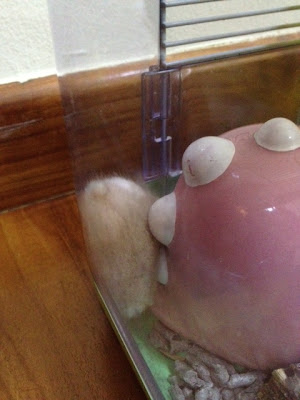 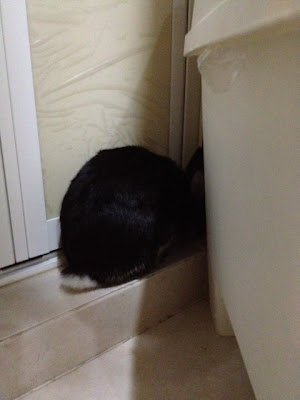 Blackie you silly rabbit, that isn't even a hole. It's just a tiny gap between the door and a box. You better not nibble the wall again!
Posted by MoB 2 comments:

It is good to see how spry Ninja still is at her age. I'm so glad to have discovered cherry tomato as a kind of vitamin C supplement for her. In fact, now we have started adding it into our diet too, seeing how it had benefitted her.

Though she can't bite, the pulp is soft enough for her to have a good part of the fruit.  See how much she loves it. 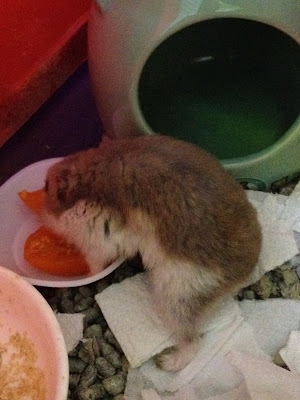 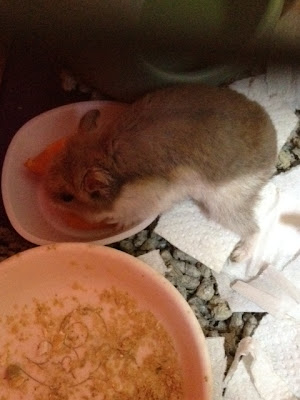 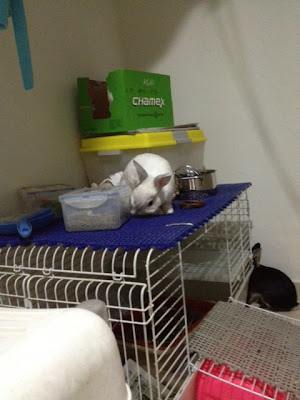 It is early morning but the rabbits are busy with their usual preoccupations. Greedy little Whitty is attacking the box with her favourite pellets, and munching up any stray hay she finds. Blackie is about to dive into his tunnel for some digging experience.

Here's how you know Blackie is a false Netherland dwarf.

Stretched out fully when relaxed, he looks so long! True dwarves are supposed to be  much rounder in body shape, and have shorter ears. The poor false dwarves have a dreadful nickname - Big Uglies - given to them by breeders. He isn't ugly, he is so cute! 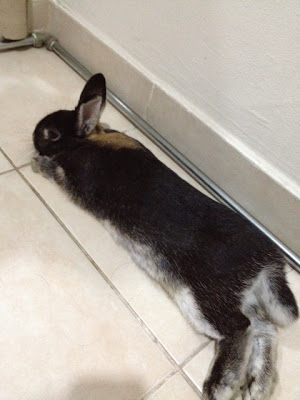 Seeing him laze there, I couldn't resist giving him some petting. Oops...he does look rather unphotogenic here, huh :P 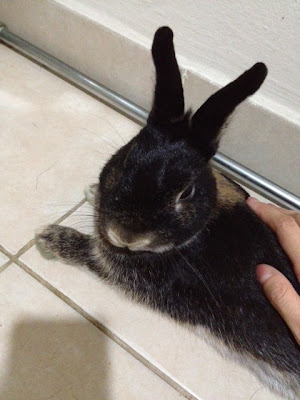 Nope, Ninja isn't getting neglected though now there is a new kid on the black. She has been getting an assortment of powdered food ever since she developed dental problems. Hm...despite her condition, she is otherwise perfectly healthy. It was very alarming at first when she became exceedingly thin because she couldn't eat. At first we couldn't figure out what was wrong. 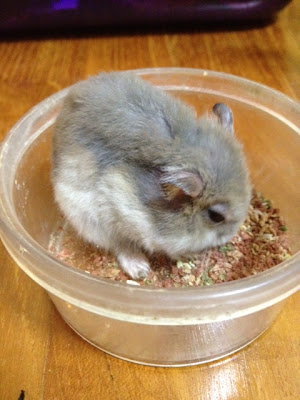 Some of her grains and seeds go into my food processor. The rest of the hamster feed is pounded using this device - a tablet cutter. I must admit, it does get very tiring preparing the food for her, but seeing her enjoy it, and waxing fat, is so satisfying. 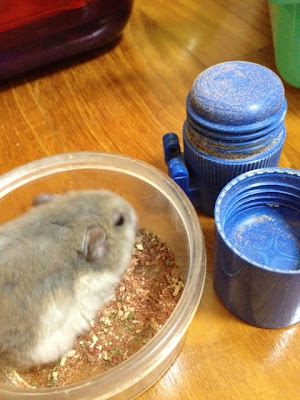 How shall I explain it? I never actually step into a petshop intending to buy an animal, but they scurry into my life in most unexpected ways. This is what happened:

I was in Pet Kampong to get supplies for the existing animals. They had a great number of dwarf hamsters, and somehow there was a lot of squeaking and squabbling. The saleslady was at her wits' end trying to separate the injured hamsters from their bullies. And this chubby pudding was in one such tank. When I first saw him, he was lying feebly on his back, surrendering to an awful bully. In fact, it turned out that he was injured too :( He looked so docile and innocent that I decided to rescue him from his tormentor and bring him home. So here we are. 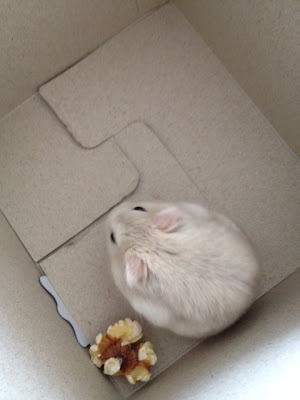 Bemused in his box, wondering what has just happened.

Then, discovering the joys of his own hamster wheel. 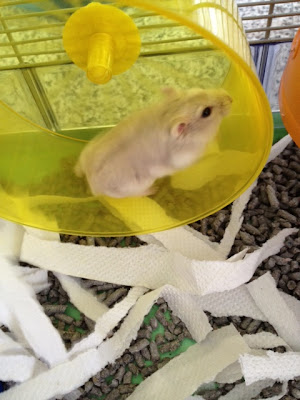 From the petshop's cramped tank to a roomy cage, with loads of toys and accessories, and all his favourite food. Welcome to my furball village, little one. This is where pets get outrageously spoilt. I am already starting him on the organic cherry tomatoes :P

Oh, his name is Potato, because he is fat and yellow.
Posted by MoB 4 comments: 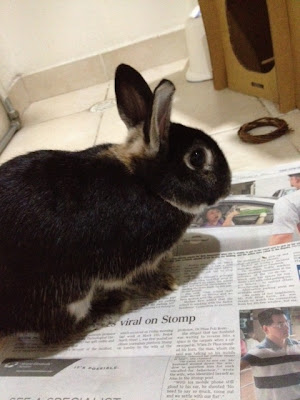 Since time is so precious, I thought perhaps I could multi-task by reading the newspapers in the rabbits' yard. In that way, we get to spend some time together too. But things didn't turn out that way. The rabbits were extremely curious about the news, and kept hopping all over the papers. 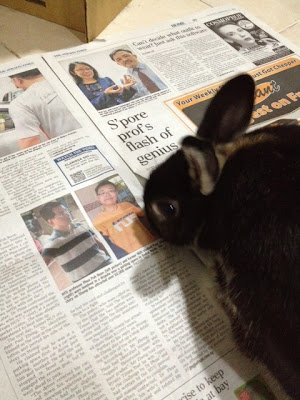 Ok, you win. Bunny slave gave Blackie a massage instead. So much for multi-tasking. 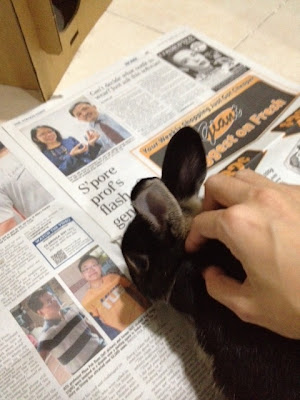 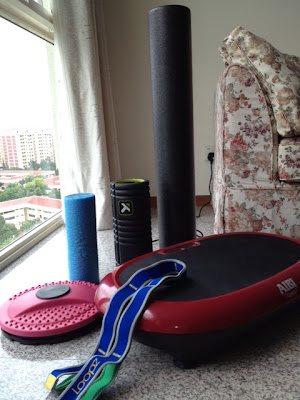 The good thing about going off replacement meals is, now I can have real food. Unfortunately, it also means that I shall have to work a little harder to burn up all the calories in my food, and it is always so easy to overeat! Sadly, now that I skate less, my fitness level has gone down noticeably.

A home gym is worth investing in, because it helps to save time from traveling to a gym outside. I could have a short workout in that time! With proper exercise techniques, you don't need to buy expensive machines that take up precious space. Here, I have:

Finally, my latest toy, the Aibi power shaper: It vibrates pretty powerfully, and standing on it works out the legs. You could do squats on it too.

Here's why you should consider getting a companion for your rabbit, unless you ARE the companion for the rabbit :) Before Whitty came, I used to sit with Blackie for one hour in his yard, to socialise with him. It was great for bonding, but life here is really too busy for me to do this every day. Now that Whitty is here, I only need to keep them fed, treated and clean.

I always think it is such a sweet sight to see them together, with their chubby Netherland Dwarf faces side by side. 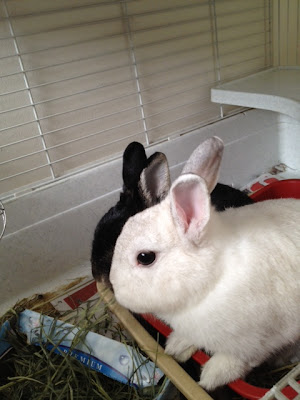 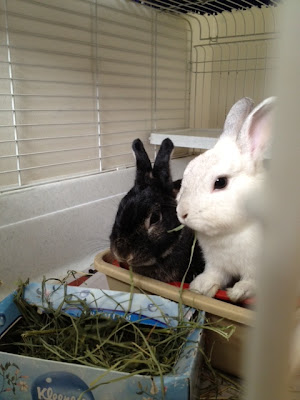 All was peaceful, until Blackie decides that he wants Whitty's strand of hay. Blackie, you are so ungentlemanly! The whole box is full of the premium hay, but you just want Whitty's! 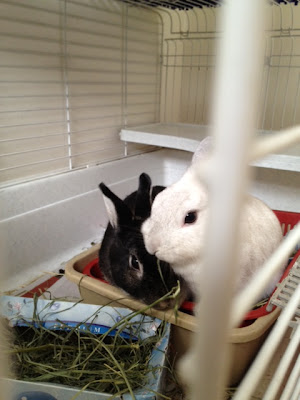 Whatever happened to saving up?

The new tough rules on car loans have unleashed yet another public outcry. New car buyers now have to fork out 50-60% of the total amount. In the past, one used to be able to waltz into a car showroom and come out with a car without much immediate cash payment, since we could get a 100% loan.

Isn't such easy financing one of the biggest reasons for the astronomical COE prices we are seeing? If people actually feel the pinch of coughing up cash for the car, we are less likely to see such indiscriminate bidding for the precious COE, and then everyone would get to pay less for the certificate. What is the problem?

Don't forget that whether you get a loan, or pay upfront, the money eventually comes from your own pocket. Seen in this light, a loan is simply delayed pain, a form of self-delusion even. Can't afford the cash payment? Then save up for it. Eventually, you would accumulate enough, right? And if you can't, why are you even thinking of buying a car?
Posted by MoB 1 comment: