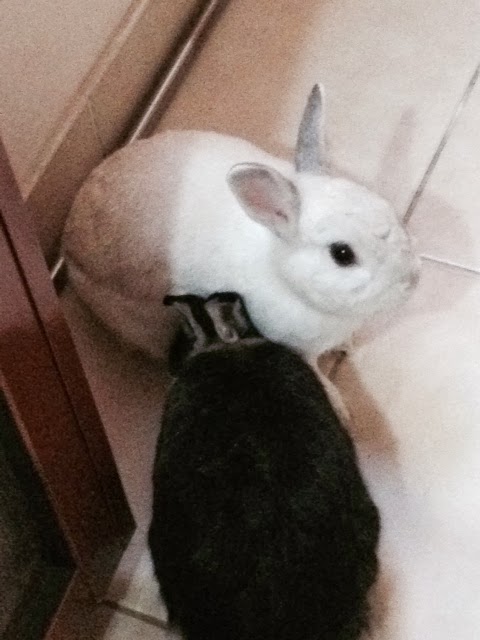 For those of you who don't understand rabbit language, let me explain what is happening in the picture:

Blackie is requesting for some grooming by lowering his head. In case Whitty doesn't get the message, he nudges her to get her to respond. Too bad, Whitty ignores him completely, because she knows I'm getting their vegetables ready. Nothing comes between Whitty and her breakfast, not even love. Come on Whitty, be nice! You are such a spoilt thing.
Posted by MoB 3 comments:

Where are the rabbits?

After coughing up a tidy sum to get the BusyBunny cottage for the rabbits, I'm now wondering if I regret being so indulgent. The rabbits love their new hideout. In fact, they are so happy with it that they refuse to come out and play with me! See? Now I have to stretch my hand in to pet Blackie :( 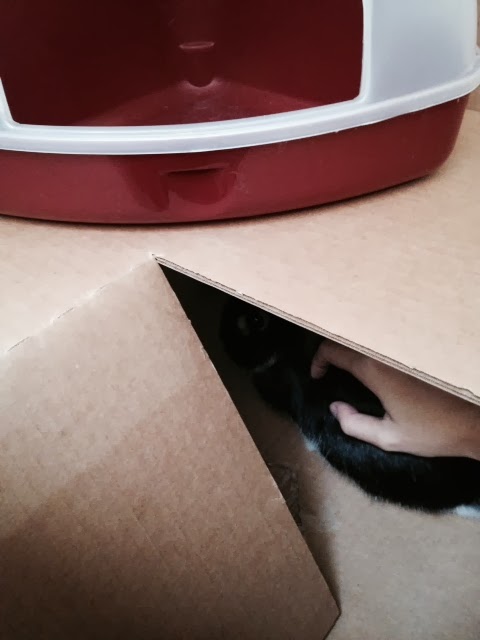 Whitty is wondering if there are treats. Nope, there isn't, so she will not come out. 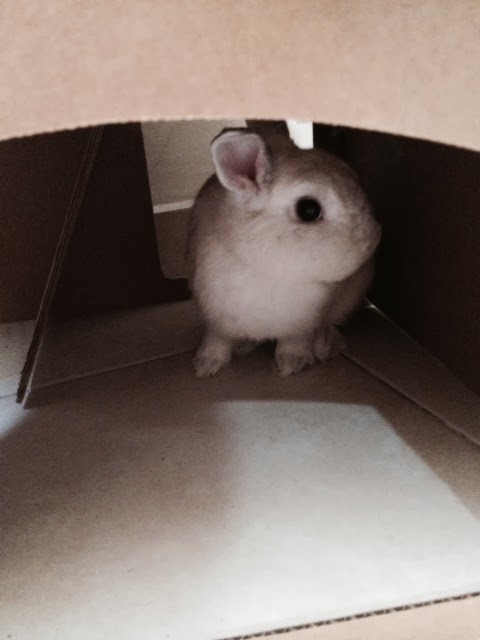 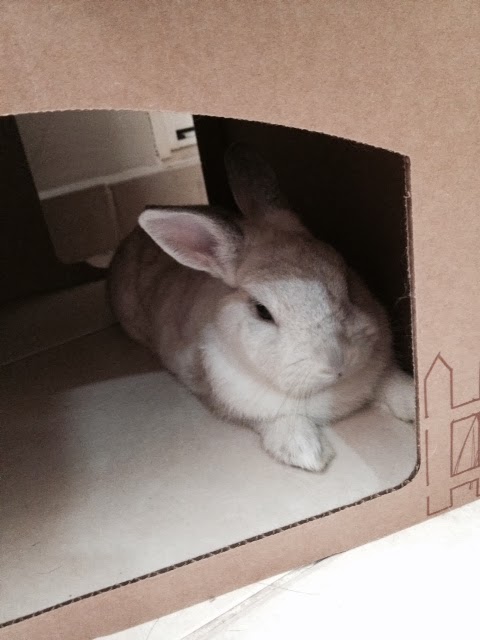 Isn't this why you bought this for us? Now go and prepare some vegetables for rabbit King and Queen.
Posted by MoB 4 comments:

It isn't justice, whatever it pretends to be.

The swift, devastating retribution that engulfed Anton Casey and the Bad Honda Driver (BHD) isn't justice.What I observe is merciless harassment by a lynch mob, by people who are not even personally injured by the deeds of the two unfortunate culprits.

While Casey and BHD might have behaved disgracefully, the responses that took place in cyberspace were nothing short of a public lynching. And did they deserve to be treated like that? Were they pedophiles, serial rapists or mass murderers? They were simply ordinary citizens who have been guilty of some incivility, that's all. Sure, they should have been chastised. But it is terrifying to see how punishment was poured out without measure, not just unto them, but upon their family members and loved ones. It is as if their acts of transgression somehow unleashed pent-up fury of origins which are surely different from the igniting spark. In short, they have become excuses for a raging mob to inflict pain mindlessly, without restraint, and probably for their own spiteful enjoyment.

I think we will regret the day we allow Internet vigilantes to judge, sentence and execute in the name of free speech and justice.
Posted by MoB 1 comment:

This proud mummy pet owner shall insist that she has the smartest hamster around.

Potato is really extraordinarily responsive. Unlike the TwinSqueaks, who remain oblivious no matter what happens around them, Potato pokes his head out as soon as he hears human voices. If you continue to talk to him, he soon comes out to look at you. He would even stand up like a mini polar bear. 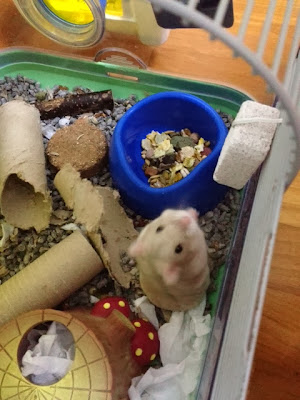 Then, if you give him a treat and rattle the bars of his cage gently, he might climb out of it, right into your hand. Isn't this so sweet and trusting? 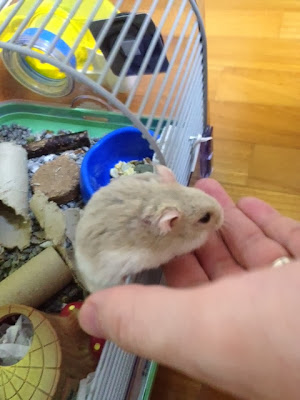 One day, Mummy came home and announced: from then on, we will only speak Mandarin at home (and English, of course). No longer will we speak Teochew, the language of our dialect group. Up to that time, Teochew was the only language I knew, so imagine my trepidation upon receiving this news. What was I going to use then?

Still, being only 4 year old, adapting to the new languages was quite an effortless process for me. Without remembering how it happened, Mandarin and English completely replaced Teochew in my thoughts and expression. I hardly understood the dialect now.

If only it were as easy for the older generations.

A few days ago, V and I had breakfast at a coffee shop, sharing a table with an old man. He spoke only Teochew, and when V was able to respond in his dialect, his delight was palpable. Though there was so little in common to talk about, he couldn't stop chattering. He told us he was 9 when the Japanese occupation took place, and his former job as a noodle seller. How lonely it must be to wander around a city where few speak your language, even though it is your home.

Am very glad that this Chinese New Year, there are gifts prepared for this pioneer generation, who have lost so much as our country progressed, from the primitive village to today's metropolitan city.
Posted by MoB 1 comment:

For days, we had noticed serious signs of rabbit attack upon the treats on top of their cage. Someone has been rampaging through all the stores, gnawing and chewing its way to delicious tidbits. The bandit even ripped open the bag of pellets! We had transfer all the remaining pellets to another container, and who knows how much the greedy rabbit had gobbled down before we noticed? 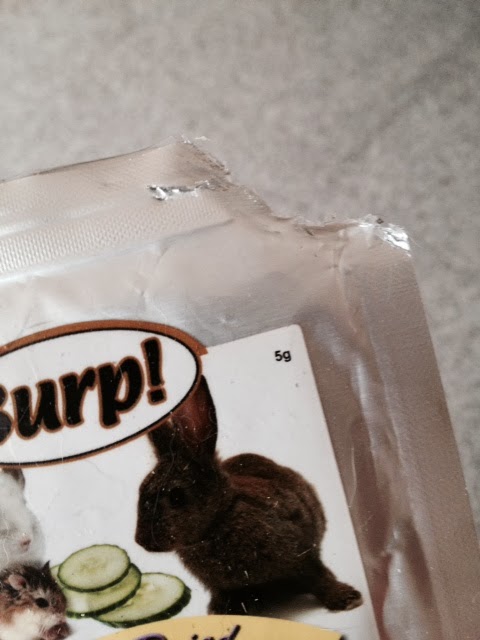 Whitty - caught in the act and trying to look innocent. Of course we should have known it is her! Blackie is too clumsy to do this. 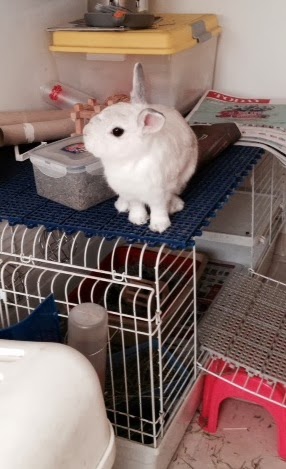 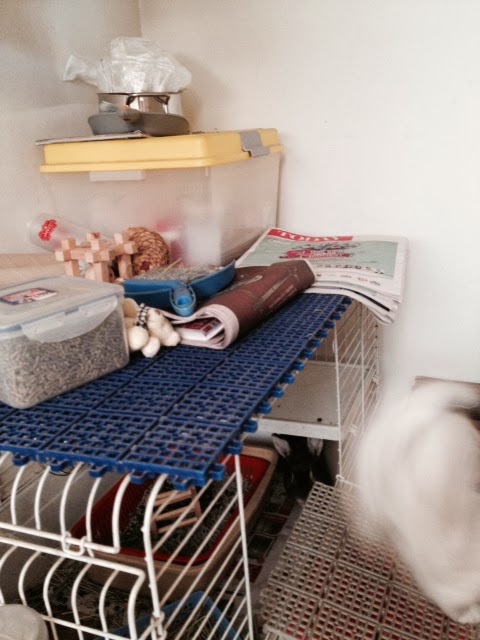 You know, rabbits are never sorry for the naughty things they do. They just run off, like this white blurry furball now.
Posted by MoB 3 comments:

It is such relief to come home to dinner, freshly cooked and delivered right to my doorstep. Considering that our home is somewhat inaccessible, we are grateful that Empire Catering agreed to take up our orders. So here we are, joining the thousands of busy Singaporean couples who tuck into tingkat meals after a full day at work. Dinner arrives before we get home, so it is left outside our home. Every now and then we get a bill, and leave a cheque inside the tiffin container. Simple and convenient arrangement isn't it? 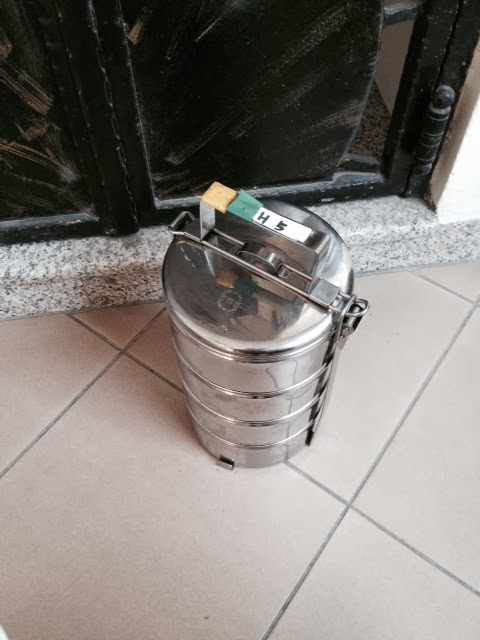 Well, the only slight drawback is, the food does get somewhat monotonous. Though different dishes are offered everyday, I guess it is hard to be imaginative about the seasonings and style of cooking. This is after all mass-cooked food. The meals invariably come with 1 clear broth of some kind, 1 kind of vegetable, 1 meat, and 1 side dish. See, Day 1 and Day 2 look dismally similar: 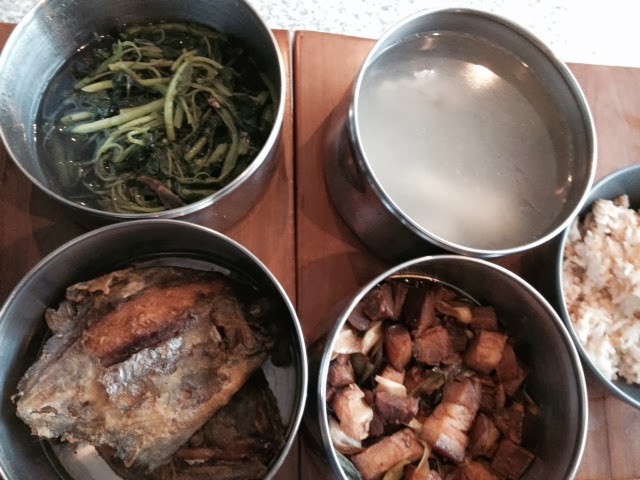 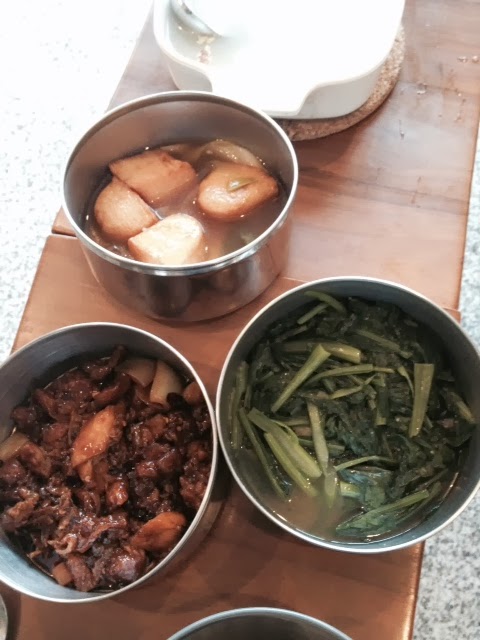 Still, nothing beats the convenience offered. The food tends to be more oily and salty than my own cooking, but it is tasty and comes in generous portions. And frankly, it still tastes healthier than a typical zi-char or veg-rice stall. To make myself feel better, I cook brown rice to go with the food.
Posted by MoB 1 comment: