How fast it is! Before you know it, week 3 of school is over...and the assignments are piling up :(

There is so much to read, so much to write! Though all the lessons are in the evening, there isn't the luxury of sleeping in at all. I feed the animals in the morning, then feed myself, and immediately start typing or annotating my readings. Lunch is usually a simple affair of bread or leftovers. Then I prepare to go to school. Oh boy, this is turning out to be much more demanding than I expected.

The happy thing is, I've started driving myself to school. As school is in an industrial area, the traffic is made up mostly of gigantic vehicles. It is quite an experience being on the roads in my little car squeezed between Autobots.

Ok, update is done. The small and smaller animals have been fed, petted and put to bed. Time to start writing my reflections on Language Acquisition.
Posted by MoB 1 comment:

It is rather a pity that people often keep a rabbit alone in the cage :( I am sure the rabbit isn't happy. They love having a friend to snuggle up to, like here: 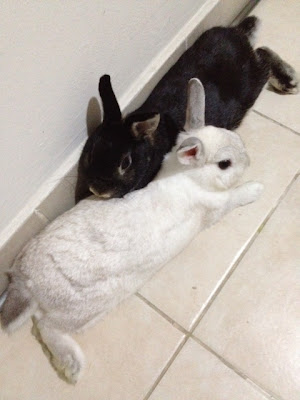 ﻿Mind you, don't just go out and bring another rabbit home without checking with your existing rabbit. They might not even get along well. It is like having a stranger plonked into your bedroom suddenly. How would you like it?

Absurd as it sounds, we brought Blackie to the petshop with us, to make sure he liked Whitty, hee hee, it was like a blind date. And see how happy they are now :)
Posted by MoB 2 comments:

Is this a new toy? A plastic cave? 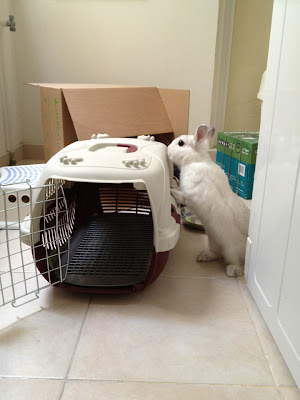 Then suddenly the rabbits remembered that this is the pet carrier...and dashed into their cage. "No, we are not going to the pet groomer's. Nothing is going to make us come out!" 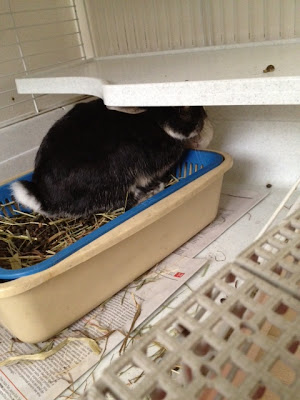 It is always such a struggle getting them into the pet carrier. They hide in a corner, scrabble frantically when you carry them, and might even nip you!  Now, Whitty is very cross and showing her back to me. Blackie is hiding behind Whitty, so you can hardly see him in the picture. You timid little thing! What sort of husbun are you? 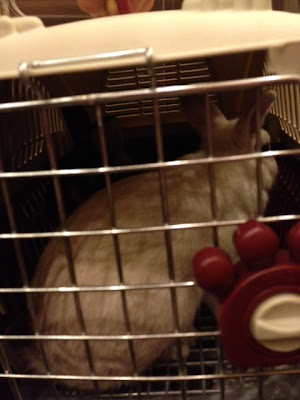 Anyway it was a super short expedition. We just brought them to get their nails trimmed and they were back in less than 30 minutes. Then it was time for some treats to sooth their ruffled feelings.
Posted by MoB 2 comments:

This is such an easy recipe, it is perfect for weekday meals. And it is high in protein, low in fat too! 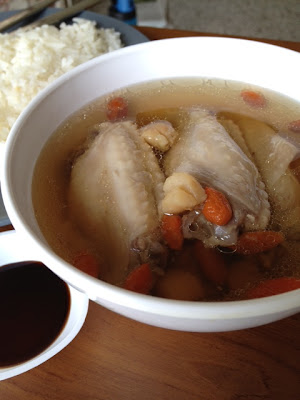 First, the chicken goes into a pot of boiling water, together with the scallops. After a few minutes, I throw in the herbal stuff and let the whole pot simmer on low heat for 20 minutes. Then it is seasoned with salt, sesame oil and Shaoxing wine. That's all! It is so easy that I could hardly believe it too :P

This is the summer version, as American ginseng nourishes the 'yin' in the body i.e. it is cooling. If you need even more 'yin', you could also add some mai men dong. Alternatively, use more warming herbs if you wish, e.g. dangshen or korean ginseng, instead of American ginseng.
Posted by MoB 1 comment:

As part of my austerity drive, I'm scrimping a little on the rabbits' toys. It seems that these home made substitutes keep them happy enough. Blackie is in his usual 'Stitch-like' mood - fiesty, mischievous and busy. 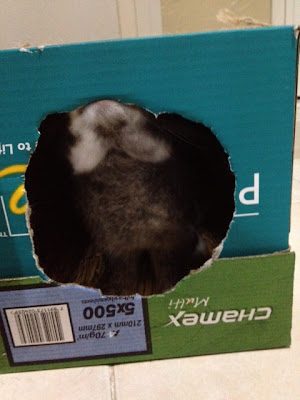 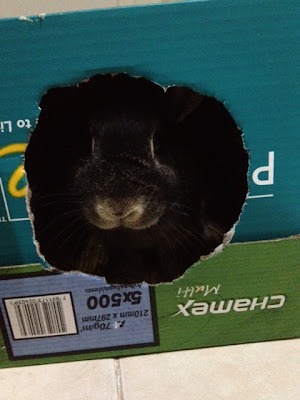 What can we do to alleviate the annual furore over over Primary 1 registration?

No matter how the rules have been amended after public feedback, many still feel that they are getting a raw deal. While students are not allowed to donate to get into coveted schools, people still begrudge those who volunteer at schools to get an edge. No one should be allowed to volunteer. It is unfair to those who can't do so.

Still others are angry that alumni get priority for their children. No one should be allowed to benefit as alumni. It is unfair to those who aren't alumni.

What if we streamline the categories further then, and perhaps...allocate purely by proximity to the school? After all, this is an important consideration. People want their children to go to school conveniently. But this would mean that house prices around the preferred schools would increase. It is unfair to those who can't afford to move near the best schools.

As a thought experiment, I tried imagining what the fairest system would look like. It has to be one in which no one has a natural or social advantage, right? Supposing...we just close our eyes and allocate the children according to their surnames, by alphabetical order. All the As and Bs go to A school... regardless of where they live etc. It could mean being sent to a school far away, but at least, it isn't because you have been unfairly treated.

Alternatively, how allocating purely by balloting? Everyone lines up and ballots at his First choice. If he fails, he then ballots at his Second choice, and so on. Eventually he would end up getting a place somewhere, even if it neither near nor desired. But at least, he has had a fair chance, and you can't blame your luck on anyone else.

Since we can't have equal satisfaction, shall we settle for equal misery?

This entry isn't meant to trivialise the anxiety parents go through. Despite racking my brains, I just can't dream up a system which everyone feels is fair, and if anyone can, please share with us so that we can resolve this problem once and for all.
Posted by MoB 1 comment:

Awwwww...do you have to be so sweet? See how the love bunnies mirror each other in their resting positions. 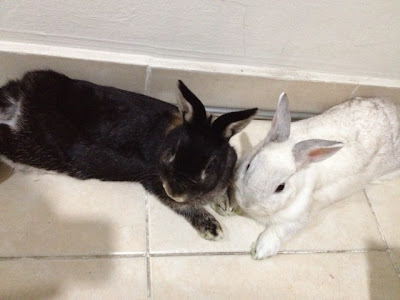 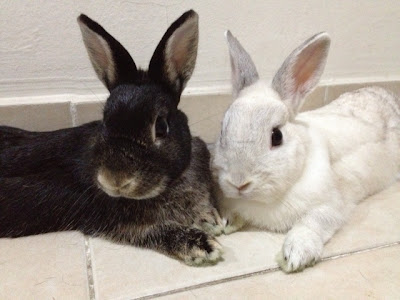 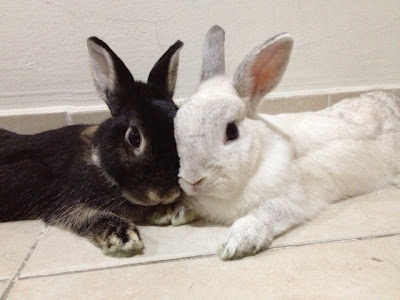 If I hadn't tried this as a child, before I developed qualms about what can be considered food, I would never find the courage to eat this now: 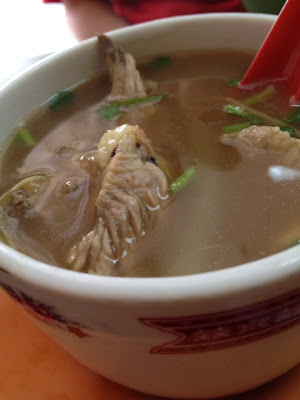 The meat is quite tough and chewy, but the skin is gelatinous. Am I grossing you out? It didn't taste particularly fishy or strange, just strongly herbal. If you can get over the 'yuck factor', it was actually pretty tasty. Anecdotally, turtle meat is supposed to cleanse our blood and strengthen our bodies...hm...couldn't really find more information on it.

No, I didn't butcher Little Bro's turtle for this. A shop at Siang Kuang road serves it.
Posted by MoB No comments:

It feels so strange to leave cubicle life and go back to school as a full time student.

As most of my classmates are part time students, all the lessons are held in the evenings, so life gets rather topsy-turvy for me.

I woke up as early as I've always did, because I haven't learnt to sleep in. Then I fed the animals, and wondered what to do with myself after that. Walking home from the supermarket, I feel like moving in the wrong direction, since everyone else is streaming towards the town centre except me!

There is a stack of readings already...it's hard to gather the energy to look through them, annotate and highlight, and then, think about my assignments.
Posted by MoB 2 comments:

For sometime, we noticed something disturbing about Ninja's paws - there seem to be black lumps protruding from her nails. Oh no...what could they be? So on her usual teeth-trimming trip, I pointed this out to the vet. She too looked perturbed and brought Ninja into the surgery for closer examination, while I stayed in the waiting room.

Suddenly, there were loud shouts of laughter in the surgery. Oops! The lumps were just DIRT! Ninja is a dirty hamster, that's all! The vet tried to keep a straight face while she handed Ninja back to me. She must be wondering what kind of paranoid pet mummy I am :P

But I am very relieved though. 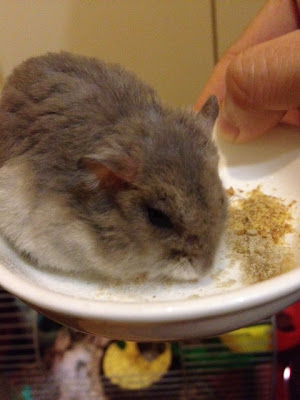 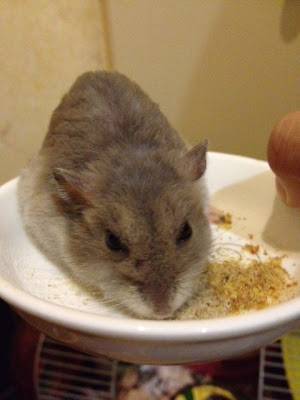 Ninja enjoying her meal of powdered sunflower seeds and flax seeds. It takes so much patience and love to keep this ageing, dentally-challenged hamster healthy and chubby.
Posted by MoB 1 comment:

Happy National Day, everyone. Things I am grateful to have in this country:

Oops, all my concerns are so low on Maslow's hierarchy of needs. But then again, it is a blessing to be able to have them fulfilled. What's the point of asking too much from life and then feeling deprived?

Lord, enable me to find the peace in this verse:

"A man can do nothing better than to eat and drink and find satisfaction in his work. This too, I see, is from the hand of God..." (Ecclesiastes 2:24)

Since the duo had been extraordinarily fiesty lately, it is time for a little reinforcement in obedience training. See, now even Blackie is able to balance the ball quite well on his head. 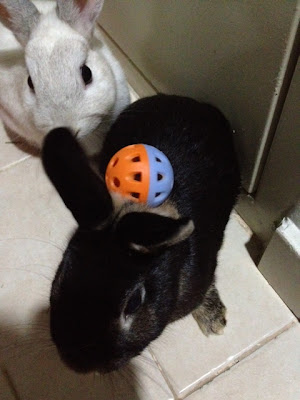 This clever girl even knows how to lower her head to keep the ball steady. 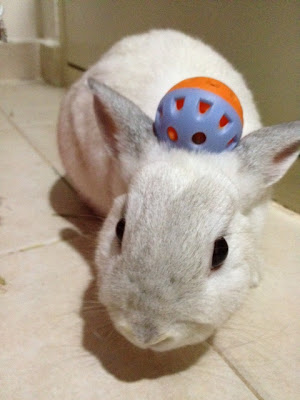 Alas, this obedience isn't applied to other behaviour though. They still charge past the pet barrier whenever they get the least chance.
Posted by MoB 1 comment:

I made cactus soup for dinner one day. It was surprisingly light and refreshing in taste, yum yum, and supposed to be good for health. 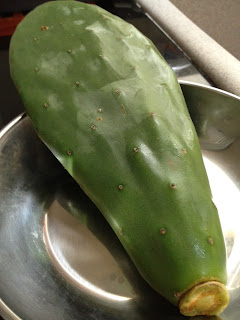 The thick, fibrous skin had to be peeled off first. Inside was spongy and slimy, kinda gross when raw. Still, this stickiness apparently is due to its high collagen content, so just bear with it. The cactus flesh reminds me of aloe vera. I cut it into chunks and put it into the pot with half a chicken, also snipped into large parts. Then I added one honey date and a handful of tiny dried scallops. 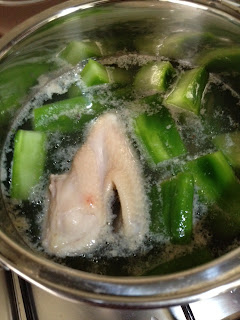 The whole concoction spent 3 hours in my thermal pot and was seasoned with sea salt. And that's it! I served it with rice.
Posted by MoB 3 comments:

The rabbits are moulting again and there are little puffs of fur drifting everywhere in the yard. I think they shed so much that I can make a sweater with rabbit wool! This is a time which requires more care to ensure that all the fur does not block up their digestion. They do groom themselves a lot, and Blackie grooms Whitty, so he is taking in even more fur.

I always give them Oxbow papaya tablets more frequently during this time. In the picture below, I'm trying to give them the tablets and shoot at the same time...hm...they are so excited that they keep bobbing up and down and practically jumped on my knees. Sorry it is so blur. 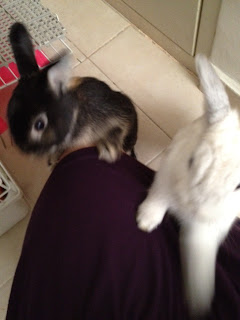 Because Blackie is so choosy about his vegetables, he gets a tummy rub  occasionally too, to keep things moving along. This is one way to do it: One hand holds the rabbit head firmly (but gently), the other hand slides down to (gently) massage the stomach. Repeat on the other side if you couldn't massage the whole stomach like this. 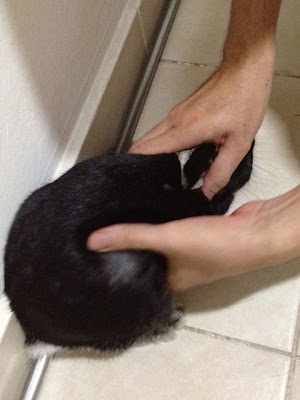