Alas, the tale of a soldier and his maiden rarely has a happy ending.

By now the photo has gone viral online and is splashed in print media as well. I'm sure the man boy is rueing his moment of slack, when he allowed his maid to carry his heavy haversack for him. Actually, maybe there are reasons we do not know. Perhaps his maid offered to carry the haversack for him and would not hear of a rejection, or maybe he just needed a few seconds to type out a message and took back the load soon.

Whatever it is, he is never going to have a chance to explain, because then we would all know who he is. And when a picture speaks a thousand words, what more can he say in defence? (pun fully intended)
Posted by MoB No comments: 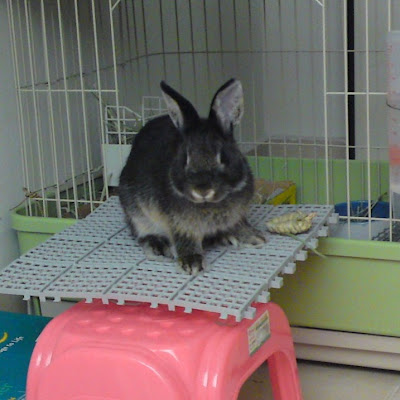 When he doesn't want to go home, nothing can make him. You have to chase him round and round until he gives up, and even then, he might give you a nip. Being intensely curious, he feels compelled to have a taste of everything, including our walls, dustpan, rubbish bag and newspapers. And he has breached more barriers than I had expected. NNNNOOOOOOOOOOooooooooo! I am too young to be a mother to an adolescent male!
Posted by MoB No comments:

I was angry with my friend
I told my wrath
My wrath did end.

I am sure that sometime, somewhere, I must have offended you. And you have certainly made me angry too. Because we can be petty yet insensitive, occasionally selfish and generally busy, it is a wonder we have any friends at all.

But people keep friends by deciding to forgive one another for most of the failings and weaknesses we see. We overlook slights and wince only slightly if a friend treads on our toes. We choose patience over offence. And we accept that everyone has his/her limitations. Surely friendships should be able to withstand some shock and friction.

If not, who would have any friend left?
Posted by MoB 1 comment:

The Kindle came just in time to prevent another costly mistake - iPad.

While others enjoy iPad for the ...I am not sure what...I would have used the iPad mainly as an eReader of some sort. Intended to get the iPad since one just can't find decent eReaders and content in Singapore. Remember how two years ago I wrote to Amazon to beg them to sell the Kindle to us?

Finally, a good friend bought and carried one for me across the oceans. Now I have my own Kindle, at last! My Kindle!

Sadly, now I see why Borders is going bankrupt. There just isn't reason to buy books anymore. My bookshelves are bursting and books gather dust. I'm a digital booklover. Woohoo! I see a new age dawning.

I shall begin by seeing if there are digital copies of Enid Blyton available. Have already found the Chronicles of Narnia and the Borrowers. Haha, what did you think I was going to read on the Kindle? Plato's Republic?
Posted by MoB 1 comment: 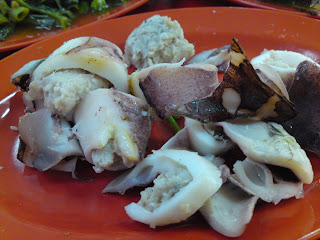 Steamed squid stuffed with pork.
Is it a traditional Teochew dish? Grandmother used to make it, together with her other oddity of a dish - liver stirfried with pineapple. Truth be told, these were not my favourite food when I was young. Children don't like fishy, leathery meats. After she passed away, no one else seems to make them anymore. So when I saw this dish again after so many, many years, I simply had to order it. Maybe as I get older, mostalgia makes me crave the comfort food of my childhood. Our cosmopolitan city offers cusines from all over the world and we are spoilt for choice, but I just want to find the simple fare I used to eat. Why are they getting so elusive these days?
In case you are also a Teochew kampung girl at heart, here's where I found this: Kovan hawker centre. Get it before it goes extinct. Even as I write, another Teochew porridge shop bites the dust. V and I drove to our favourite porridge place to find its shutters down and renovation work going on. What has happened to Soon Soon Restaurant! 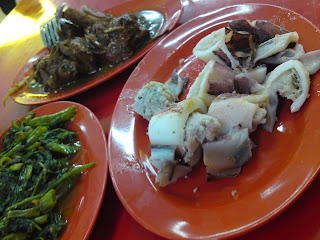 When he is not charging and binkying around the play area, Blackie likes nothing better than lounging beside a cool spot. 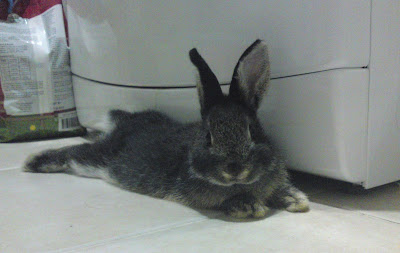 The ears tell you that he is happy :) 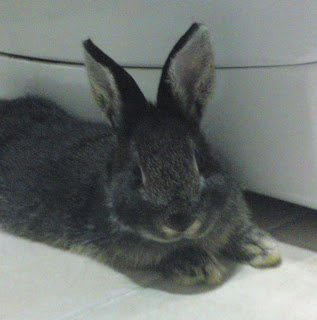 It is hard to dispute Masterofboots' argument. Blackie is an active growing boy who needs lots of space to run about. Hey, some people let their rabbits run everywhere in the house. They would be miserable if they are confined to the cage all the time. And hence, this is a compromise of sorts: Blackie gets the laundry yard, the master bedroom toilet and the hallway. Grrr...my beautiful home!
The long and narrow hallway is perfect for a rabbit run. We only have to close the doors and block up the escape. 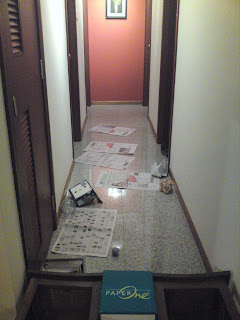 But!!! The naughty thing isn't even contented with the space he's got! See the rabbit ears sticking out behind the barriers? He is wondering how far he can breach his territory. Hmmm! 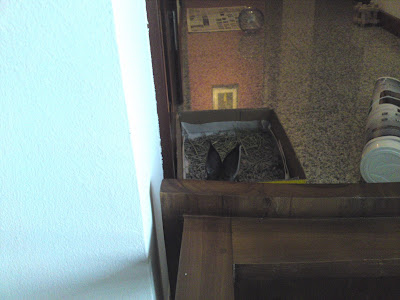 Shooed back into his area. Now he is investigating the doors and trying to get into the rooms. Rabbit! Stay in your area! 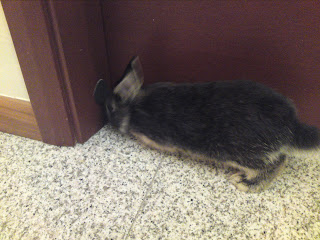 I usually buy tissue packs from the special needs vendors who roam the streets to peddle their goods. Naturally, one quite expects to pay extra because of their underprivileged situation. Even then, hey, 100% inflation is too much! $1 usually gets one 3 packs, but that day, an old lady sold me 2 packs for $1.20. Grr...
Posted by MoB No comments:

Not wanting to confine Blackie in the cage all the time, I sometimes let him come out to play. He gives everything a curious nip, so the play area has to be bunny-proofed.
Here he is, investigating the Squeaks' bedding. 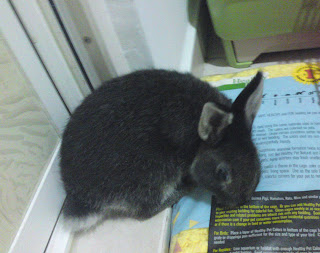 And this is taken after a few futile chases around the play area. He is not going back, so there! See how he keeps an wary eye on me in case I try to grab him again. 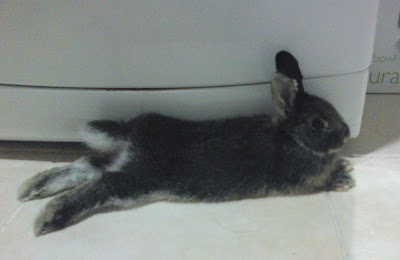 He goes back to his cage on his own when he is tired of playing outside. Wilful furball!
Posted by MoB 1 comment:

A little story about the elections

As election drumbeats grow more frantic, the various opposition parties are getting ready for battle. As it is no secret that the war has already been lost, I am always surprised that there are people who are willing to plough in time and money to fight for their cause. For them, the rewards are scant, and recognition must be given to their sacrifice and effort.

But something happened to make me feel very glad that we have a rigorous system that keeps the wrong candidates out. This incident was reported at a recent gathering of the opposition parties, when all gathered to decide on the areas for their election campaigns. After the meeting, one man actually lost, of all things, his shoes! The victim then proceeded to look around for another pair of shoes that fitted him and wore those instead. And thus, he turned one act of theft into two.

Goodness, if these men aren’t clowns, I don’t know what a joke is. I’m not sure which I found more ignominious – the act of stealing, or the pettiness of the stolen item. It is great relief to know that they are not likely to win a seat in our government.
Posted by MoB No comments: 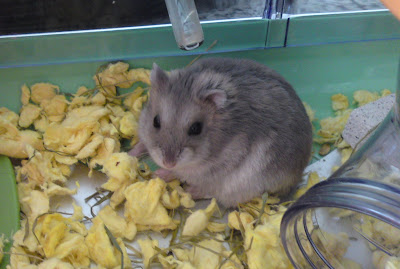 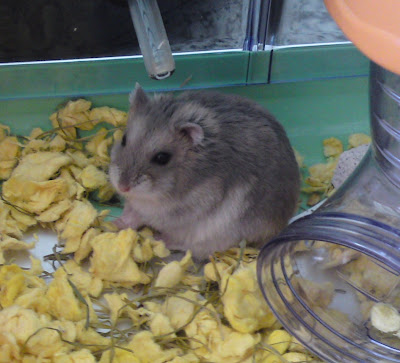 Ninja has grown so fat too! No more flying off the wheel. They are so fat that they don't fit into their favourite corners anymore. How funny it is to see the two roly-poly furballs run everywhere, squabbling half the time:
'you move over'
'no you! You are squashing me'
'it's you, fatso'
'who are you calling fatso, fatso?'
The Squeaks are having a crisis - shortage of sunflower seeds. As they are really very chubby, I have decided to put them on a diet. Bought them pellets instead. These are supposed to be nutritionally balanced and less fattening. The Squeaks don't like it :P Playing less and sleeping more. Don't tell me they will go on hunger strike until they get the sunflower seeds back.
Posted by MoB No comments:

Every morning, the alarm clock doesn't only wake the two of us up. It is also a signal for all the little animals at home, so that as soon as I switch on the lights, this is what I see:

PipSqueak standing expectantly beside her food bowl.
Ninja already in her food bowl eating up all the stale food. Silly Squeak!
Friendly climbing unto the bars of the cage asking to come out. And now there is
Blackie waiting by his cage door, pawing it.

Who does masterofboots attend to first? Now I know how busy Noah must have been in his ark!
Posted by MoB No comments:

I'm swooning. Nope, not from the cute overload, but with exhaustion chasing Blackie.

I know, I know, of course I shouldn't run after him, but what is the owner to do to get him back into his cage? Like a naughty, active child, he wants to binky around the yard, but we can't leave him there all the time. I learnt that a rabbit is very much faster than a hamster :P And his claws are SHARPppp.

And he has a will of his own. As Blackie has already decided that his litter box is his bed, he poops and pees everywhere EXCEPT the litter box. He likes his bed clean. As Snake suggested, I have to get him a solid mat so that he can rest his paws. He likes it so much that he pooped all over it. There! Now everyone will know it is HIS!

1. Toilet train him properly. Maybe I should just give him two litter boxes - one to sleep in and one for him to answer nature's call.
2. Teach him to go back into his cage after playtime. Hm...but no one likes being locked up all the time.
3. Find a way to fix a harness on him so that he can walk around a bit more.

Read the link on rabbit language. Uh oh...now I know he's cross every time we return him into his cage.
Posted by MoB 1 comment: 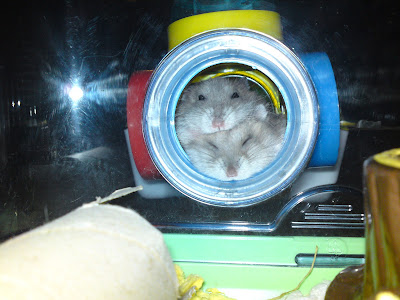 The main reason I love hamsters is, they are simply absurd. Just looking at them sleep in such a ridiculous pile up makes me laugh.
Posted by MoB No comments:

Inflation doesn't always come in the form of price increases. Sometimes, the portions just gets smaller. I am cross that my favourite Qiji nasi lemak's kuning fish is doing a disappearing act. 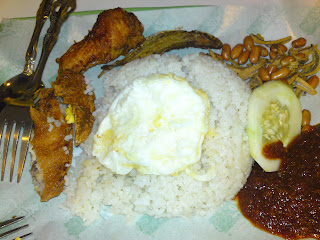 A close up here so that you can see how tiny the fish is, and I've put in the drumlette for perspective. Hmm! 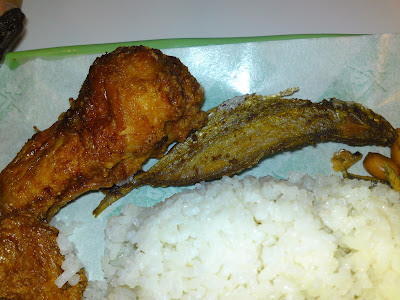 ﻿
Posted by MoB No comments: