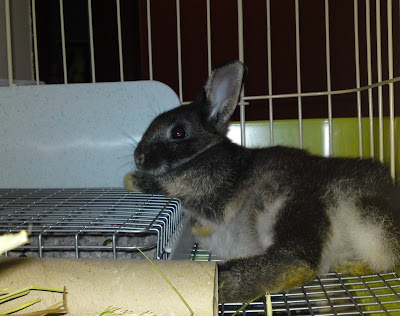 It wasn't intentional. I never quite stepped into a pet shop with the purpose of buying a pet, but somehow, it happened time and again, and again. There is always a furry little creature waiting in ambush, with all of its cuteness, especially when it comes and looks at you with the 'are you here to bring me home?' look.

And so here he is. Blackie. He is a timid boy, not the least like the hamsters. I'm not prepared for this, really. I'm reeling with the shock of what I have done.
Posted by MoB 3 comments:

I don't see blogs dying, even if it becomes less fashionable.  http://quidestveritas.blogspot.com/2011/02/fighting-obsolescence.html

But I don't really care. Since I have kept a diary for 20 years, I think I have the stamina to keep this blog running for a long, long time. And like an indulgent parent pet owner, I insist on telling the whole world (or my 12 readers) what my silly furballs are up to every day.

Besides, what would I do without my favourite cooking blogs or beauty blogs? Maybe the cybercool gang have lost interest in blogs, but trust me, the female blogging community will keep this medium thriving for a long time.
Posted by MoB No comments: 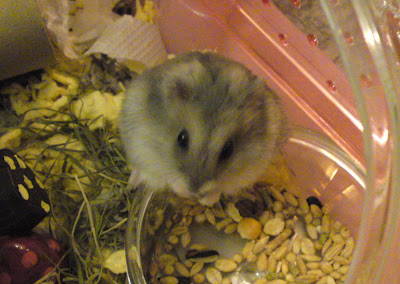 Ninja,eating up all the tastiest bits in the feeding tray while Friendly is out of their cage, running in her ball. She has recovered completely from the Great Escape episode and rapidly turning into a fat potato too. Something tells me that I'm overfeeding my Squeaks.
Posted by MoB No comments:

My hairstyle has come a full circle.

Had my long hair chopped off for the hot weather. Such decisions are always made on the impulse, because if I stop and think about it, I would definitely hesitate. Felt rather rueful when I told the hairstylist, 'I haven't had such short hair for years!' I know, this is a blog entry about nothing. Just to mark the end of an era for my hair. :P
Posted by MoB 1 comment: 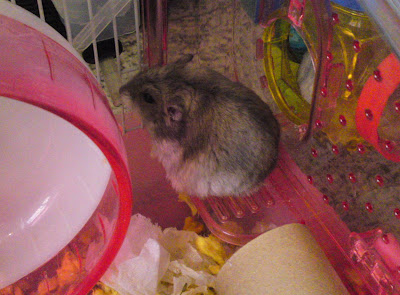 This greedy girl eats and drinks so much that she is chubbier than ever now. We call her Friendly Potato, which is exactly what she feels like. 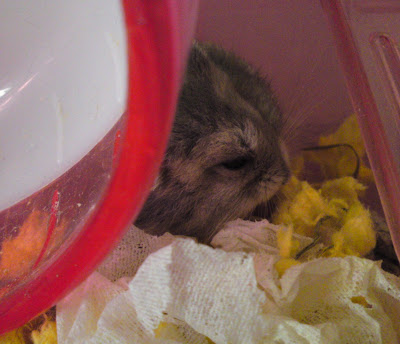 Friendly isn't in a friendly mood. I kept poking her round tummy when she was sleeping, and she got really cross.
Posted by MoB No comments:

Trust is exposing my tummy when I sleep and not expecting to be poked. 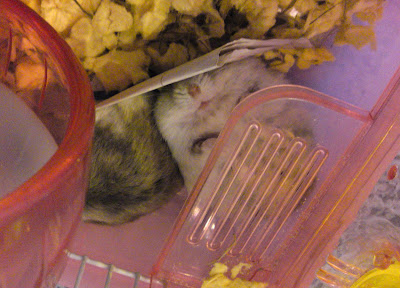 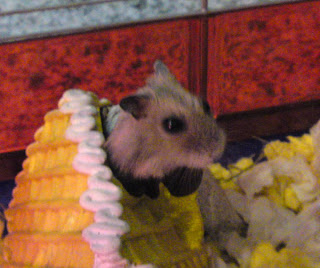 Poor little girl! She isn't as cuddly and happy as the twins. And we have to bring her to the vet again. The abscess isn't going away :(
Posted by MoB No comments:

I am perturbed. As someone working constantly with text and vetting work, I always try to make sure that I have reasonably good knowledge of language rules, and as far as I know, the word 'leverage' does not come with 'on'. Why then do I see it everywhere? And now it has crept into mainstream media, in an advertisment for an IPO. Now, either the copywriter had been most negligent, or a new rule is emerging. Sigh, this is so confusing. 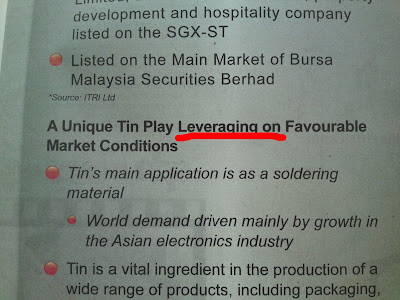 Is it a sign, a warning, or mere coincidence?

Been bumping into my former students everywhere. Either Singapore is really tiny, or many kids passed through my classroom.

It is hard to know how to respond, since most of the time, I have forgotten their names, though how clearly I remember my experiences with each of them. Some had been delightful to teach, some were bright but distant, and a few left a dreadful taste in the mouth long after they are gone. About the last group, one is too many.

There were students who were ungratefully demanding, and students who made remarks as if teachers had no feelings. We used to joke wryly that students think teachers go into cold storage after school, to be activated only in the next morning. Frankly, I think this kind of hurt is the reason teachers burn out and give up. Hard work may break one’s back, but discouragement kills one’s spirit.

It occurred to me that whether I return to the classroom, I have to forgive these students who made teaching such an uncomfortable profession to be in. There is no excuse for their behaviour, but I would be foolish to carry this baggage any longer. They have moved on and so should I.

I suppose people see parents and teachers in the same light – they are expected to give unstintingly without complaint, and to lay down their lives for the next generation. That is why beyond a job, teaching is considered a calling.
Posted by MoB No comments:

Lost and found: One Playful Squeak 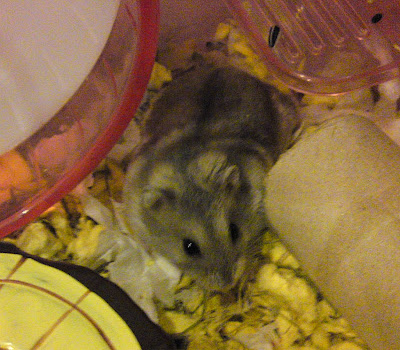 This is Ninja. She's the prettiest of them all.
Posted by MoB No comments: 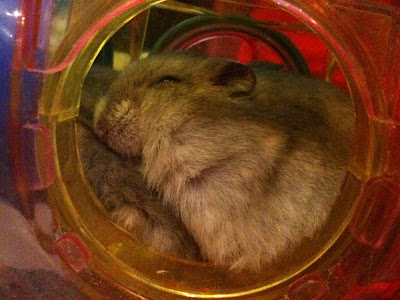 Maybe it is because we have provided them with such a safe and comfortable environment, these two Squeaks have the healthiest self-assurance possible. They are perfectly confident of their cuteness. They reject any food they don't like, expecting you to feed them with plenty of what they prefer. They pee and poo all over the place because there is room service at least twice a week.
Then, they sleep so soundly that the sky can fall on their heads and they won't know. They don't care if you poke their tummies or pull their ears. They will jolly well sleep until they feel like waking up ... to play.
I want to be a Squeak too :P
Posted by MoB 4 comments:

Don't mean to belittle our most celebrated Chinese New Year, but you know what, it has always reminded me of a war. The shops are shuttered, basic services come to a standstill. Even the ATMs run out of money. On the first day of CNY, you can't get good coffee anywhere so a caffeine addict like me has to stock up.

But I'm all prepared. I charged through the supermarket with a basket in hand, swooping down on fresh fruits and vegetables, tinned meats and yes, my 3-in-1 Old Town coffee. The supermarket was in a state of emergency, with cashiers ringing up sales frantically and people snatching goods off the shelves.

So now my fridge is full, I've collected $2 notes and lots of angpow paper. OK, like a good girl scout, I am ready. Let CNY happen.
Posted by MoB No comments: